You are at:Home»Current in Fishers»Fishers author signs new book 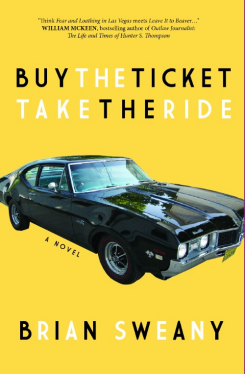 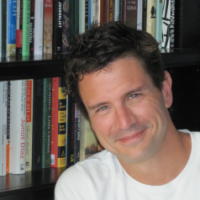 Brian Sweany took the ‘write what you know’ memo to heart.

Sweany, a 44-year-old Fishers resident, has written “Buy the Ticket, Take the Ride” based on many of his life experiences.

The book will be released by Rare Bird Books on April 12, 2016, followed by a national tour.

“I’m getting the support I never got before,” Sweany said.

The book is actually a reworked version of his first two books, “Exotic Music of the Belly Dancer” and “Making out with Blowfish.” Those were eBooks that were not effectively marketed by an eBook boutique publisher, Sweany said. That Australian publisher mostly featured female erotica original authors.

“I was the male author they never figured out how to publish to their audience,” Sweany said.

His new publisher suggested combining the first two books into one novel with new material.

The new novel centers on the same character from his first two books, Hank Fitzpatrick, a character with some similarities to Sweany in his youth.

“He’s a Garp character, a boy figuring out to be a man when all the examples of men in his life are monstrous examples of what a man should be,” said Sweany, referring to John Irving’s “The World According to Garp” character.

Sweany’s father John, a Columbus, Ind., car dealership owner, died in a tragic accident at an Auto Auction in 1992.

“The car came in out of control when he was standing there bidding on a used truck,” Sweany said. “That event is told in detail in this novel. This is seismic event that pushes our main character forward as it pushed me forward in life. You have this boy who went to bed a boy and had to wake up a man because he had no choice. I was 21 at the time. The other major event is Hank’s godfather sexually abused him. Again that was a true story. These big tragic events are what shapes the book but really it is mostly a comedy, which is hard to believe.”

William McKeen, who was one of Hunter S. Thompson’s biographers, described the novel as “‘Fear and Loathing in Las Vegas’ meets ‘Leave It to Beaver.’”

“That’s a really good description of it,” Sweany said.

Sweany, who is married with three children, has worked for Recorded Books since 1999, the world’s largest audiobook publisher, as the director of acquisitions.

Sweany recently finished writing the first book in a young adult fantasy in what is a projected trilogy, which Sweany describes as in the vein of “Buffy the Vampire Slayer.” Sweany said the working title for that book is “Gods of Homecoming.” The next two books are outlined.

“Even my adult writing has a lot of coming-of-age, arrested development style to it that made transition to YA (Young Adult) comfortable for me,” Sweany said. “For me, I’ve always found the young adult character more interesting because they are so unreliable.”