You are at:Home»Current in Carmel»Carmel Community»Carmel residents question setup of Monon Trail Crossing at Main Street 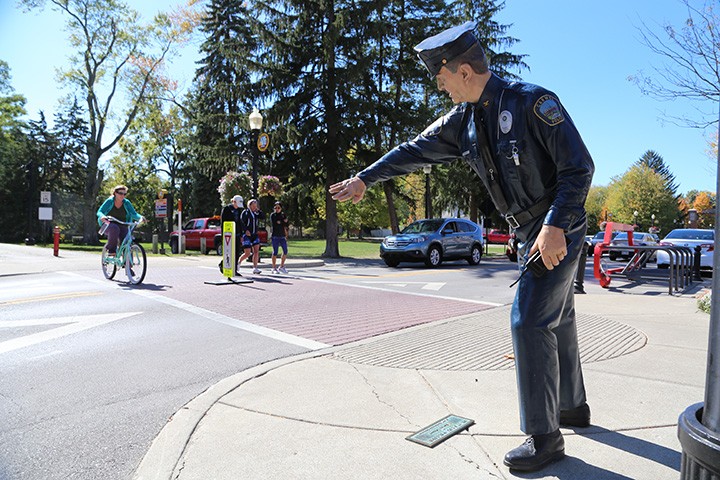 The Monon Trail and Main Street are both high-traffic corridors designed to bring people into the heart of Carmel, but some residents believe that the setup of the pedestrian crossing leads to confusion and potentially worse.

Signs tell users of the north-south pedestrian trail to stop at Main Street for vehicular traffic, and flashing lights along the east-west road help motorists be aware of potential foot or bicycle traffic at the crossing even though vehicles are not required to stop.

Pat Lovett is among many Carmel residents who feel the setup is confusing.

“It just seems to me, with constant passage through there, that there is a great likelihood that there will be an injury, with such great proximity to automobiles and pedestrians,” Lovett said.

Carmel city engineer Jeremy Kashman said it is crucial that pedestrians on the Monon understand trail protocol and Indiana law to stay safe.

“Our signage clearly indicates that trail users must stop at intersections for vehicular traffic. However, once a pedestrian steps into a crosswalk, they have the right-of-way and cars must yield,” Kashman said. “This follows Indiana law, and it’s important that trail users educate themselves on this and other trail use etiquette.”

But, for Carmel resident Sue Herman, the signage at this crossing, and others, is not clear enough.

“Maybe instead of the yellow flashing lights for cars, who automatically think ‘oh gosh, I need to slow down and stop,’ maybe we need a flashing red light for the Monon users,” she said.

Herman and other residents have also said that a police statue at the intersection adds to the confusion.

“(The statue) almost looks like a live policeman approaching from a little bit of a distance,” Herman said. “It wouldn’t hurt to move the statue, if it could be done.”

Kashman said that the statue is positioned specifically to remind trail users to be cautious at the crossing.

“The statue of the police officer was placed at the intersection of Main and the Monon to mimic the act of helping pedestrians cross the heavily traveled intersection safely,” he said.

The Carmel Police Department said it did not have any reports of vehicles hitting pedestrians at the intersection in the last three years. Lovett, however, would like the city to take a look at the matter before that changes.

“I think too much traffic, pedestrians and cars, are mixing there,” Lovett said. “And, we need to do something about it if we can.”