You are at:Home»Current in Carmel»Carmel Community»Up, up & away: Carmel couple turns love of hot air balloons into long-running business 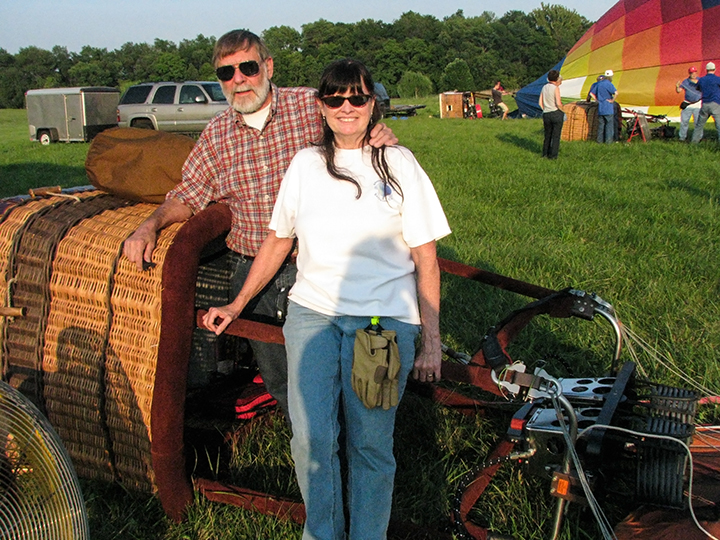 Ruthie and Nick Hoffbauer, owners of Above and Beyond Balloon Co. (Submitted photo)

It all started with a 40th birthday present in 1980 to Ruthie Hoffbauer’s husband.

“My daughter Tamara and I gave Nick a balloon ride,” Ruthie said. “He loved it so much and we loved chasing (to the landing site). That was on Sunday and Wednesday we bought a balloon. That’s how a lot of people get into ballooning they go up and love it.”

The Carmel residents operate Above and Beyond Balloon Co.

Nick and Ruthie had been Indianapolis Public School school teachers and then opened a wood-working and kite shop in The Bazaar at the Keystone at the Crossing for about 10 years. The Bazaar was later closed as the Fashion Mall expanded. The balloon business became their full-time pursuit in the mid-1980s.

“It was getting difficult to do art shows and ballooning because both are in the summer,” Ruthie said.

“Most people when they get into it, they buy a used balloon,” Ruthie said.

The Hoffbauers have two balloons now, but have had as many as four at one time.

Ruthie, who handles the scheduling, said it is about $200 a person for a ride for four adults.

“Sometimes two people will just want to go together so it’s more expensive per person, about $350,” Ruthie said. “It’s (a hot air balloon ride) on a lot of people’s bucket lists so a lot of people give it to their as gifts.”

Ruthie said generally passengers should be about seven years old.

“We like them to be able to see over the basket,” Ruthie said.

By that age, the children are more likely able to follow instructions, handle the noise and comfortable with the size of the flame.