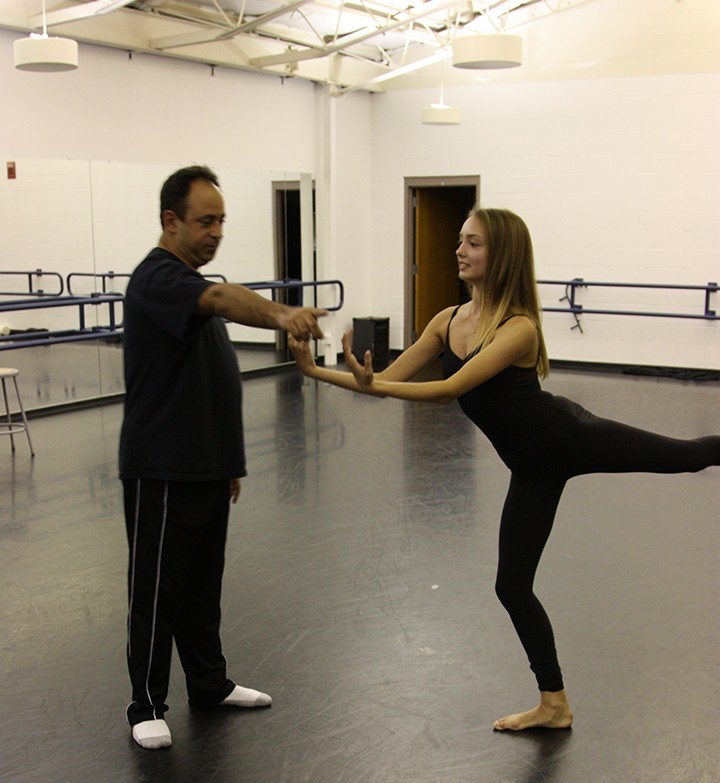 Carmel teenager Mackenzie Kirk is one of eight dancers to portray victimized children in “Remembrances: A Ballet in the Memory of the Victims of the Holocaust.”

“You know how you feel when you sit there in your car for a minute after you’ve seen a serious movie, and you ask yourself, ‘What did I just see? What am I feeling?’” said choreographer Brian Honigbaum, who created the ballet in 2001. “That’s what we are trying to get.”

Honoring the 11 million Jews and others who died in the Holocaust, Honigbaum stays true to the historical and chronological context of the event in various sections representing the atrocities of the Holocaust as the audience follows a family of three through it all. There are the prison-like ghettos of Central and Eastern Europe. The massacre at Babi Yar, where 33,000 Jews were killed in two days. The Kristallnacht or “The Night of Broken Glass,” when Jewish businesses and homes in Munich were destroyed by German storm troopers. The death trains transporting Jews like cattle to life-snuffing gas chambers.

Then, there are the innocent children; an estimated 1 ½ million youths were murdered. The youths appear midway through Honigbaum’s piece in a section focused on the victimize children. They are portrayed by eight dancers from the Indianapolis School of Ballet, including Carmel teenager Mackenzie Kirk.

“It’s a moment when the audience can take a deep breath,” said Kirk, a freshman at Brebeuf Jesuit High School. “They can pause for a few minutes.”

Kirk, who aspires to be a professional dancer, said she is “honored” to work with Honigbaum and DK and especially to help explain more about the Holocaust, a subject close to her heart.

“I first found out about the Holocaust in the fourth grade when we read about ‘The Diary of Anne Frank,’” she said. “Each year after that we kind of touched on it but it was never enough for me. I wanted to know why it happened and how one person would do that to so many people.  I wanted to be a part of it of what DK was doing, so I auditioned.

“The whole story is so moving. The gas chamber section is so real. So intense. When I first watched them (the DK dancers) do it I had to bite my tongue to keep from crying; I didn’t want to draw attention to myself.”

Training at the Jordan College Academy of Dance on the campus of Butler University,  Honigbaum was 8-years-old when “a mean old Jewish lady” (Jordan Dance secretary Agnes Vogel) would yell at him for running down the halls of the very Jordan Annex he was choreographed this production

“One day I noticed she had some numbers tattooed on her arm and I asked her about them,” recalled Honigbaum, a former DK dancer himself who now is Ballet Master with Corpus Christi Ballet. “She told me her story. Through the years, I got to know her husband, Michael, who was well-known educator on the Holocaust.

“Being Jewish and being human I felt that it was my responsibility to tell the story so that people could see it and would not forget it happened. I spent 20 years trying to figure it out. I just want to keep their story alive.”

Dance Kaleidoscope presents “Remembrances: A Ballet in Memory of the Victims of the Holocaust”

As many as 6,000 middle school and high school students will see “Remberances” in six free performances, thanks to support from the National Endowment for the Arts. Choreographer Brian Honigbaum says this is about educating the students in the community “to make sure this never happens again.”

“Yes, it’s about the Holocaust but it also has a broader message,” Honigbaum explained. “It’s about the hate, intolerance and bigotry in the world that is getting worse every day. Whether it’s anger or discomfort they feel when they see this, that feeling will stay with them. Then, when they’re at school and somebody is getting bullied or some kid is getting beat up in the corner they’ll know that feeling. That’s my goal.”