You are at:Home»Current in Carmel»Carmel Community»Petersen juggles motherhood, job, triathlons 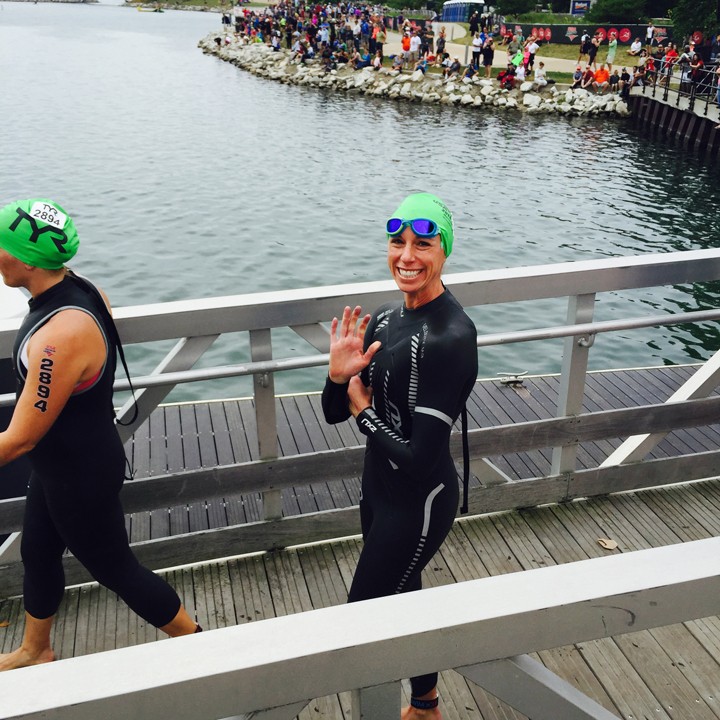 Christie Petersen competes in a triathlon in August in Wisconsin. (Submitted photo)

Christie Petersen was getting a little burned out just running.

“It’s tough on your body the older you get, so it’s good to switch it up,” the Carmel resident said. “You can take the impact off your body with swimming and biking.”

So she was convinced to give triathlons a try.

“What started out as a motivator to stay in shape during and after my pregnancy has become my passion,” Petersen said.

Petersen completed her first triathlon less than a year after her first child was born. Petersen, now 37, is No. 1 in Indiana in her USA Triathlon age group (35-39). She was the top female overall in an Olympic distance triathlon at Eagle Creek in Indianapolis on Sept. 6.  She is training to qualify for the USAT age group world championship in 2017 by finishing in the top 18 at the nationals at Omaha, Neb., in August 2016.

Petersen said many see that as a lofty goal since she has a full-time job in architectural sales and has two children, Andrew, 5, and Ashley 2.

Petersen said many people tell her she is crazy for getting up at 4:30 a.m. to train.

“But I think I would go crazy if I hadn’t found triathlons,” Petersen said. “Training has become my time to let go of all the stresses of daily life.”

Petersen played tennis at Hamilton Southeastern High School and one year at Ball State. After starting to run when she was 29, her goal was to complete her first half-marathon before she turned 30. She made it three days before her 30th birthday in 2008.

During the past five years, Petersen has completed 18 triathlons, three half-Ironmans, three half-marathons and one full marathon.

“Maintaining a healthy and balanced lifestyle is something I want to pass down to my children,” she said.

Petersen credits her husband, Ryan Rodgers, and sister, Maggie, for providing support.  Rodgers travels frequently for his job as vice president of development at Pedcor Investments and is amazed at how well his wife keeps on top of everything.

“It’s a great accomplishment to do so many things and figure out how to get it all done in 24 hours a day,” Rodgers said. “You have to be really dedicated and efficient.”