You are at:Home»Current in Zionsville»Mathnasium a formula for success for owner

Ron Smith is sold on the Mathnasium method. 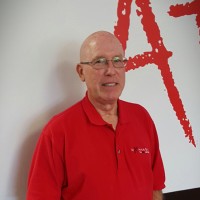 Some first-hand experience convinced Smith to open a Mathnasium at 10725 N. Michigan Road in Zionsville this spring.

“I have a grandchild I’m raising, and I have a rescue child that I’m instrumental in her upbringing,” said Smith, a former Zionsville resident who now lives in Carmel. “The rescue child is age 9 and my granddaughter is 8. Since they live with me, I know what their schoolwork is like. My granddaughter is very good at math, and the 9-year-old is very poor at math.”

In the spring of 2014, Smith decided to find math help. He looked at several tutoring places before learning about Mathnasium. In the summer of 2014, he took both children to the Mathnasium in Fishers. Mathnasium instructors see their roles as supplementing what the students are learning in school on an individual basis. The centers are structured as a learning center rather than a tutoring center.

“Mathnasium has open enrollment and you drop in any time you want,” Smith said. “I told the kids one Sunday we couldn’t go to Mathnasium that day because my wife and I had an obligation. The 9-year-old said, ‘That’s OK, we’ll go for an hour-and-a-half tomorrow.’ I was floored. I’ve been in board rooms, and I recognize when something comes across meaningful like that you better realize what was just said. I took that to heart. After being retired for three years, I knew I was ready for something else.”

Smith, who sold the commercial insurance agency he started 30 years ago to a publicly traded company on Wall Street in 2011, went to Los Angeles to meet with the Mathnasium founder. He was quickly convinced to start a franchise.

The average time a student spends at Mathnasium is 16 months, Smith said. The center also is for talented math students.

“I have a 5-year-old doing fourth-grade math,” he said.

Richard Lakey serves as a center director. Lakey previously taught algebra at Ivy Tech. There are six part-time instructors. The hours are 3:30 to 7:30 p.m. Monday through Thursday and 10 a.m. to 2 p.m. on Saturday. For more information, visit mathnasium.com/Zionsville.