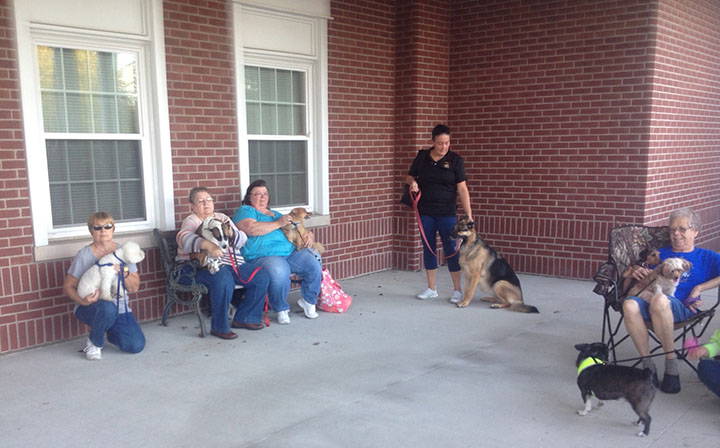 Residents brought their dogs to city hall during the Oct. 5 council meeting to show their support for the animal shelter resolution. (Submitted photo)

Animal control is a vital part of any city or municipality, but unfortunately it is an organization that Lawrence has gone without for nearly two years. The former organization responsible for animal control in Lawrence was shut down in 2013 after a gruesome discovery of several deceased animals at the shelter facility. Those responsible for the care of the animals ultimately faced criminal charges.

“The shelter was left unattended by the man who was hired to take care of it and so [several]of the animals starved to death. One was found on the floor that they had to scrape off. It was pretty grotesque,” Common Councilor Linda Treat said. “When the animals died and they were discovered it was horrendous. It shocked this community.”

But the city was not only left shocked and anger over the situation; it was also left without a proper animal control facility. Now councilors and the community are looking towards a new no-kill shelter for Lawrence.

On Oct. 5 at the Lawrence Common Council meeting the need for a proper shelter was exemplified further as councilors proposed a resolution regarding a new no-kill shelter in the city. The resolution states that currently Lawrence is paying to both transport and locate animals in Indianapolis, and that as a second class city Lawrence deserves a proper animal shelter. The resolution was passed in an 8 to 1 vote and as part of the resolution it was proposed that funding for the shelter be allocated in the 2016 proposed city budget.

Also mentioned in the resolution was the consideration of using property located at 4223 N. Shadeland Ave. The property, which is already owned by the city and vacated, looks to be an excellent location for the proposed animal shelter, according to some councilors.

“We’ve got the building just sitting their empty collecting dust,” Treat said. “We’ve already been paying the taxes. We’re already paying the utilities to sit empty. Why not put the animals in there? That’s what you do is you serve the public and that is one of the services we can give.”

But on Sept. 21 this building was put up for sale by city administration, an action that surprised common council president Tom Shevlot.

“What’s confusing, a little more frustrating than confusing, is we asked the administration in the last few council meetings why they are doing appraisals on the building and were they intending to sell it,” Shevlot said. “Now we find that there’s a public notice in the paper for the city to sell this building.”

Both Shevlot and Treat felt that the building was a prime location for a no-kill animal shelter.

“This particular facility would have been ideal,” Shevlot said. “We own it. We’re not paying anybody for it. Rather than continue to sell city assets we thought it would be a great idea to launch a no-kill animal shelter there. When it hit the paper it was kind of news to all of us that [the city]was intending to [sell]it.”

“It was given to us by the Marion County Sherriff’s department when they closed that branch down and no longer used it,” Treat said. “It’s a really nice building. It’s perfect for animals because it’s got two bays in it where the Marion County police cars were parked. The bays are big enough to wash cages and bathe animals. There is a fenced in run where the animals can be taken out that can be provide some exercise. There’s a kitchenette in the building where they could put a fridge so they could keep medicines that they need for the animals. There’s even an area in the front where they could bring animals out to show for adoption processes.”

Lawrence Mayor Dean Jessup did not return  requests for comment as of press time.