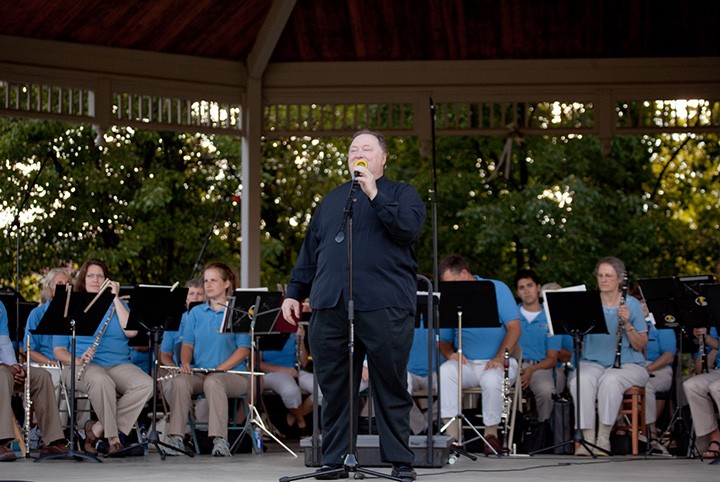 Charles Conrad, IWS conductor, leads the Indiana Wind Symphony at a performance earlier this year. The IWS will open its 18th season on Oct. 17 in Carmel. (File photo)

The Indiana Wind Symphony will open its 18th season with an October Joyride.

The name of the concert, set for 7:30 p.m. on Oct. 17 at the Palladium, is derived from two pieces the IWS will play, called “October” by contemporary American composer Eric Whitacre and “Joyride” by 28-year-old American composer Michael Markowski

“This will be the third piece of Markowski that we have played and I think he has a bright future ahead of him,” IWS conductor Charles Conrad said.

Kelleen Strutz, a classical and jazz pianist and vocalist, will be the IWS’s special guest. She will perform George Gershwin’s “Rhapsody in Blue,” which Conrad described as one of everyone’s favorites.

One piece is “Pageant” by the late Vincent Persichetti, who is celebrating the 100th of the anniversary of his birth this year.

“Persichetti was one of several composers in the 1950s who started writing serious pieces for concert bands,” Conrad said. “That had not been in vogue for 20 and 30 years before that. The concert band, at the turn of the 20th century, was considered artistically in the same sphere as orchestras, ballet companies and operas. It had fallen badly in the 1930s and ‘40s, to the point it had become more of historical relic playing patriotic concerts and more for entertainment than artistic merit. Persichetti was one of those who started the band back up the food chain in terms of artistic merit.”

The show will close with Alfred Reed’s “Armenian Dances.” Reed died 10 year ago so Conrad said this is memory of this 10th anniversary of his passing.

All six of the 2015-16 IWS shows will be at The Palladium. The next IWS show will be Hollywood Highlights on Nov. 7.