You are at:Home»Current in Carmel»Carmel Community»‘Downton Abbey’ tea talk set 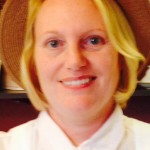 Tina Jesson has been completely hooked on “Downton Abbey” since the first episode.

“I think it’s because it reminds me so much of my great-grandma,” Jesson said.

Her great grandmother, Gladys Irene Woolley, was a scullery maid at Bradley Hall in the village of Bradley in Derbyshire, England at the time “Downton Abbey” was set. Scullery maids traditionally were the youngest of the female servants and they often act as an assistant to the kitchen maid.

Jesson, 49, will give a speech at 7 p.m. on Oct. 13 at the Washington Township Parks & Recreation building, 1549 E. Greyhound Pass, Carmel, about memories she has from her great-grandmother’s stories.

“My family story has a lot of similarities to the downstairs story of the staff of ‘Dowton Abbey,’” Jesson said. “We’ll have some family photographs and photos in the UK of the places where my great-grandmother worked.”

“Schooling doesn’t last as long as it does now. She had to go into serving quite young,” Jesson said. “I remember my great-grandmother telling me when the Titantic went down and that’s the opening scene in episode one of the first series. Then it goes through the 1920s.”

Jesson, who moved from England with her husband in 2008, owns Tina’s Traditional Old English Kitchen in Carmel.