You are at:Home»Night & Day»Tailgating with Joe Drozda: The three Cs of tailgating 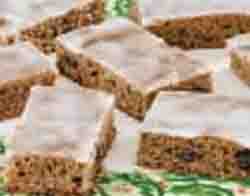 Cinnamon bars are a great sweet treat for any tailgate. (Submitted photo)

According to most ancient historians, chairs didn’t become common until the 16th century. Prior to that, chairs were a symbol of “authority and luxury” and common people sat on stools, benches and chests. Today some tailgaters keep alive that five-century old tradition of sitting on chests (coolers) and stools (folding). The rest of us, however, have discovered the comfort of using chairs to seat tailgating friends. When it comes to selecting seats their concerns are for the three C’s.

The most compact of seats are easily the bag chairs that fold to fit into the small footprint of a narrow carry bag. These come in almost every school color and also with licensed logos for the color criterion. Bag chairs, however, sit one very low and require him or her to exert a physical effort to rise to a standing posture. We’ve discovered the most comfort with Captain’s and Deck chairs from Coleman that have a higher seat platform (17+ inches). These chairs fold and are available in most school colors. Their footprint, even when folded, is much greater than bag chairs, so space may become an issue. Be sure to have chairs for your tailgate party as a symbol of “authority and luxury!”

Here is a great bar recipe for morning tailgates or a breakfast buffet at home. It’s from Shirley Wilmot a Gopher fan in Minnesota.

Combine flour, granulated and brown sugars and margarine and mix on low heat until crumbly.

Press two cups of this mixture into an ungreased 9”x13” baking dish. To the rest of the mixture add the soda, cinnamon, salt, vanilla, buttermilk and egg. Mix well and pour over packed portion, already in dish. Bake 20 min. at 350 and then cool for at least 30 min. For frosting, mix butter, milk, powdered sugar and almond extract.