You are at:Home»Current in Zionsville»Column: It’s that time of year, and I don’t mean football 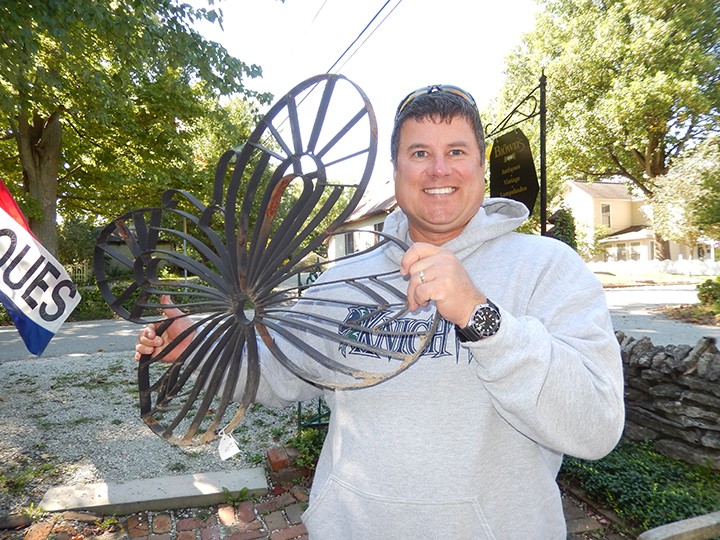 At this time of year it’s too late to swim and too early to go to Brown County. It’s perfect for garage sales. Which helps explain why half the Village is selling and the other half buying from each other’s driveways. I decided to check it out.

In Sugarbush, Debra Heffernan, a hair stylist at Body Beautiful, was styling the homefront by selling stuff she no longer needs. With four sons, ages 8 to 18, she had a lot of stuff.

So what could I do? I re-purposed Debra’s child bolster seat. What her kid has outgrown will be perfect for my granddaughter, 7-year-old Katie. This was not my plan.

The best buy at Debra’s? Books at 10 cents each.

David Brown, owner of Brown’s Antiques on Fifth Street, was hosting his annual garage sale to clear out things and start a new year. Brown’s began on Halloween, 1945; so this is the time of year he always starts anew.

“The hardest part,” said Brown, “was getting it all out, especially in the rain.” He had moved an entire driveway full of things outside-inside-outside three times.

His least expensive item was a dish for 50 cents. The most expensive was a cupboard at $85.

Mike Farley dropped by and picked up a metal butterfly for his wife, Martha’s birthday. I know what it cost, but I’m not telling.

Meanwhile, Nicki Winkles just downsized from a farm house on Hunt Club Road to a ranch on Walden Court. She had lots of stuff for sale.

“I just don’t have the space for it,” she said.

A seven-foot-tall Christmas tree was going for $20. Nicki says the family will still have lots of Christmas trees, “Two regular, three small ones for the kids’ rooms, and one Halloween.”

Two bicycles were priced at $50 each.

Over at Olde Dominion, an estate sale was in progress. The estate is that of the late Daniel McMahon, who died unexpectedly of a heart attack.

Stephen Ullrich, a friend of McMahon and an attorney, was handling the sale.

The hardest part, he said, “was being able to find, stage and price everything.” The best part was what the best part always is: “Meeting people and talking to them.”

I’ve decided that’s the real charm of garage sales. It’s not the money, it’s not even the cleaning out everything. The best part is meeting each other – young, old, rich and poor – right in your own driveways.