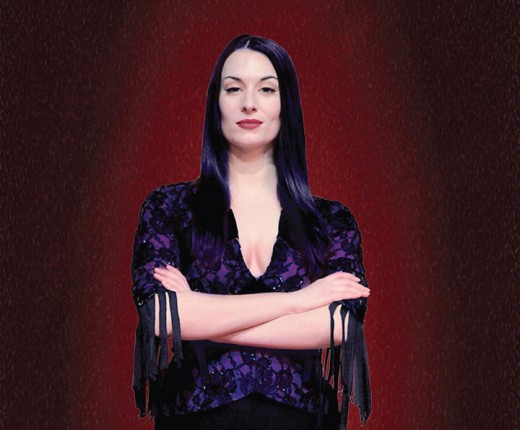 For Erin Cohenour, playing Morticia is a natural.

“It’s fun because the character is so iconic. Everybody knows ‘The Addams Family’ so I have some really awesome source materials,” said Cohenour, who will play Morticia in the musical version at Beef & Boards from Oct. 8 to Nov. 27. “People have been supportive. The other day the makeup artist posted a picture of my makeup he designed on Facebook for me and it was so awesome because people posting ‘She was born to play that part. I can’t wait.’ I’m almost 6-foot tall, I’m very curvy and I have really long dark hair and I’m very pale. I just look like Morticia and I’ll take it as compliment.”

Cohenour, 27, said she integrated the work of Carolyn Jones’ portrayal in the TV series from the 1960s and Anjelica Huston’s performance in the 1991 movie into her own version.

“I love the movie,” the Indianapolis resident said.

“Occasionally I get a chance to do straight plays … but musicals are what I prefer because I love to sing and dance,” she said.

Cohenour, a Cathedral High School and IUPUI graduate, also works as a draw host for Hoosier Lottery for the televised drawings and for Act Out, a social-issue improv theater group.

Cohenour and Eddie Curry, who plays Gomez, began rehearsing the tango ahead of rehearsals.

“I don’t tango very much in my day-to-day life,” Cohenour said with a laugh.