You are at:Home»Current in Carmel»Carmel speech pathologist works to engage Asian Americans in politics 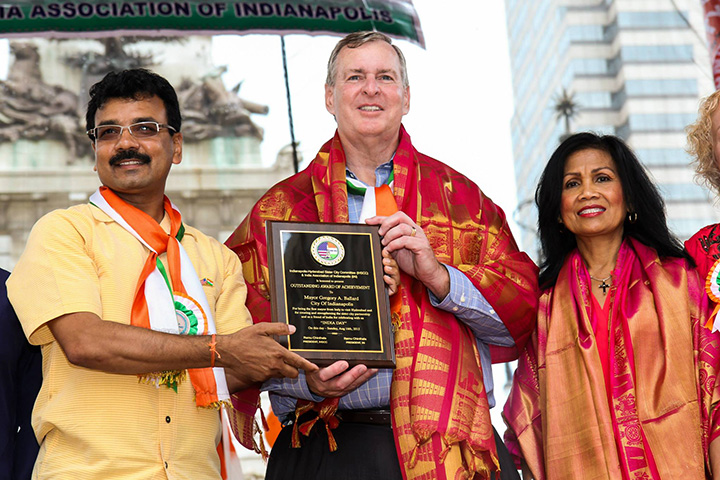 Raju Chinthala, left, presents an award to Indianapolis Mayor Greg Ballard, who is joined by his wife, Winnie, on behalf of the Indianapolis-Hyderabad Sister City Committee and India Association of Indianapolis. (Submitted photo)

According to the most recent U.S. census, Asian Americans are the largest minority in the city of Carmel, making up around 9 percent of the population. But those large numbers haven’t meant power at the polls during elections.

That disappoints local activist Raju Chinthala, and he’s working for it to change.

“When I looked at the data, the Asian population seems to be so shy and doesn’t want to get involved in politics,” he said. “Surprisingly, many of them become citizens but haven’t even registered to vote so that’s the sad part of it. So we want to get them registered to vote, no matter which party they choose to support.”

Chinthala, a speech pathologist who has lived in Carmel for three years, founded the Asian-American Indiana PAC to help encourage engagement. But the 48-year-old is also trying to step in and be a local leader as well.

Originally from India, he moved to Indiana in 1996 but didn’t really get involved in local politics until 2003. He volunteered for campaigns for Indianapolis City-County Council and became a U.S. citizen in 2008.

Today, he’s involved in numerous groups. He was the event organizer for the first International Day of Yoga in Carmel. He is the president of the Indianapolis Hyderabad Sister City Committee, president of the International Marketplace Coalition and chairman of the Bully Prevention Alliance. Chinthala also led Indianapolis Mayor Greg Ballard’s delegation to India in 2010 and 2013. Carmel Mayor Jim Brainard appointed him to the Mayor’s Advisory Commission on Human Relations.

Chinthala also threw his name out as a replacement for State Rep. Steve Braun, a post that ultimately went to Donna Schaibley, a former secretary of the Hamilton County Republican Party.

Chinthala said he definitely leans Republican but that the Asian-American Indiana PAC doesn’t take sides when it comes to parties.

He said he feels it’s his duty to be so involved.

“If I don’t get involved, then I can’t expect anything different,” he said. “So if I want to see change, then I need to be involved.”

Residency: Moved to Indiana almost 20 years ago but moved to Carmel three years ago

What he loves about Carmel: “It’s the friendliest city I’ve ever been in. It’s got great culture. And I love the bike lanes and roundabouts.”