You are at:Home»Current in Zionsville»Vonterra developers offer 55 acres in new park land

Zionsville could soon be acquiring 55 acres for a new park.

Developers of the proposed Vonterra subdivision off of Zionsville Road in south Zionsville presented a plan to the Parks Board on Sept. 9 that included donating about half of the land in the 110-acre neighborhood to the town to use for a park. The topography of the site makes it unsuitable for building homes or anything else. 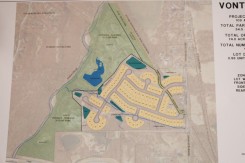 A render of the proposed Vonterra development and park.

“It’s quite an expansive and attractive piece of ground,” said attorney Mike Andreoli, representing builder Ryland Homes. “It’s grown over in many aspects and pretty rough, but there are some really wonderful terrain parts of it.”

The site was previously the home of Worman’s Clean Fill and Organic Recycling, which closed after more than 30 years in business. Worman’s owner Canda Smith said the high property taxes made it difficult to continue operating in Zionsville. She has retired and plans to travel with her husband.

Smith said developers have approached her about purchasing the property for years, and she is pleased with the plan to use half of the site for a park and preserve much of the nature.

“I see great things in the future for the land,” she said. “I’ve tried to do it right.”

The proposed park is separated from Starkey Park by Eagle Creek on its western border. Plans call for it to include a southern expansion of the Zionsville Rail Trail.

Andreoli said the land could be a good fit for off-road bike trails. The site also includes a pond that is estimated to be 30 to 40 feet deep.

“It was literally the clearest body of water that I think I’ve seen in the state of Indiana,” said Steve Bullington, president of the Parks Board.

The proposed 107-home Vonterra subdivision will be discussed at the Zionsville Plan Commission meeting Sept. 21. The Parks Board was unable to vote on the land donation because it did not have a quorum.