You are at:Home»Current in Carmel»Obituary: Nicholas L. Wolfe 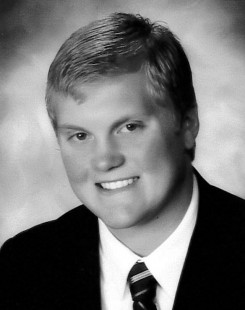 Nicholas L. Wolfe, 20 of Carmel, passed away Sept, 3. He was born July 17, 1995, in Indianapolis. He was a 2014 graduate of Carmel High School, where he was an honor student and played on the football team. Nicholas had a passion for helping others, evidenced by his involvement in the Carmel High School and Indiana University Dance Marathons that raised money for Riley Hospital for Children. Nicholas’ last act of generosity is that he will be an organ donor.

Nicholas was planning to be a doctor and was a member of Phi Delta Epsilon, a pre-med fraternity at Indiana University, where he was a sophomore as well as a Hutton Honors Scholar. Nicholas was a member of St. Elizabeth Ann Seton Catholic Church in Carmel. He was an avid IU and Colts fan. He aspired to be a team physician for an NFL football team. Nicholas loved his dog Harley.

Family and friends are invited to gather from 4 to 8 p.m. Sept. 8 at Flanner and Buchanan-Carmel. A funeral Mass will be held at 10:30 a.m. on Sept. 9 at St. Elizabeth Ann Seton Catholic Church.

Memorial contributions may be made to the Carmel Education Foundation.