You are at:Home»Current in Carmel»IU North CEO hands on with therapy dog program 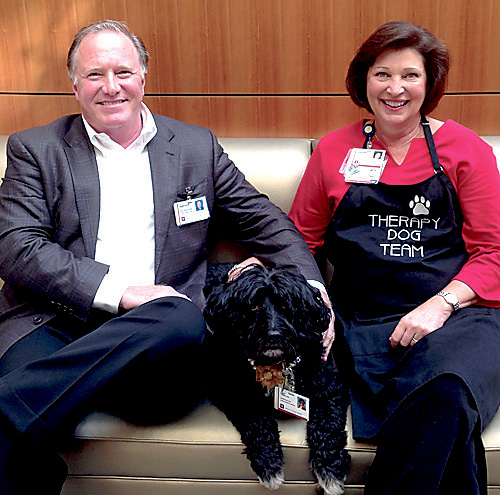 Jon and Theresa Goble with Lily. (Photo by Mark Ambrogi)

How huge? Well, Goble and his wife, Theresa, are certified trainers and take their own Portuguese water dogs around to patients.

Goble, a Carmel resident, said he had three reasons for wanting to take part in the program himself.

“The second reason is our dogs are high energy. They needed a job. They need to have something to focus on or activity. Otherwise they become devil dogs and terrorize you by making up their own fun.”

The third reason is a personal one for Goble.

“As a CEO, I needed a reason or excuse to get into a patient’s room to understand how we were caring for the patient,” Goble said. “My excuse is the dog therapy. But I do more than that. I go in and I listen to the patient and watch what’s going on. When I walk into a patient’s room with the dog, it’s an icebreaker. They don’t think about who’s on the other end of the leash, they think about this fuzzy, lovable creature. I don’t usually tell them what I do until the very end, then I have a conversation about how the care is and I learn an enormous amount from that interaction.”

Theresa serves as his assistant when they go around on Fridays visiting patients. They have served as trainers for six years, beginning one year after the program started at IU North.

Goble’s dog, Lily, who turned nine years old in August, was certified as AKC Good Citizen dog first with Goble as her handler. Their younger dog, Brooke, was trained shortly thereafter with Theresa as her handler.

Theresa said her husband decided he wanted to get a Portuguese water dog after seeing their neighbor’s canine.

“They’re really cute and they’re really smart,” Goble said. “And they don’t shed, which makes them a perfect breed for (visiting hospitals).”

Since they already had a dog, he had to hound his wife for awhile until she gave in.

Theresa said they take the dogs all over the hospital.

“If the doctor doesn’t want us to go in, we won’t go in,” Theresa said. “We never go into a room unless the patient wants us in there. We always ask if they like dogs and would like a dog visit.”

Typically, the response is enthusiastic yes. The stay is usually five minutes.

The dogs can work wonders with their soothing presence.

“I never forgot one elderly patient who wasn’t communtative. He just reached his hand out and started rubbed Lily’s head,” Goble said. “Lilly sensed something and laid her right next to his leg. He didn’t say anything but the tears were streaming down his face, because there was a connection. That was the start of his recovery and it was amazing.”