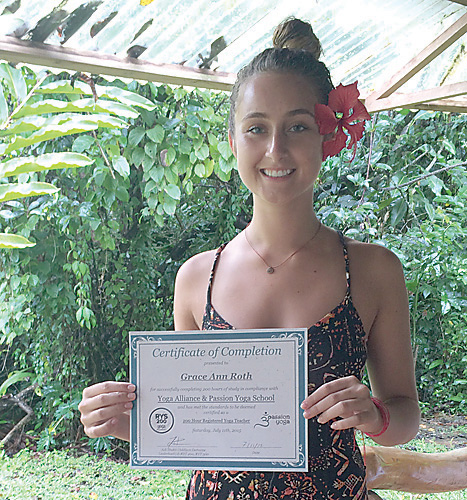 Most visits to Facebook include checking up on friends or sharing status updates, but for Grace Roth it led to a trip to Costa Rica.

The Carmel resident recently returned from an eight-week yoga certification class at Passion Yoga School, a Costa Rican program she learned about while browsing Facebook.

“I was shocked when I called Adi Shakti, founder and the head instructor of Passion Yoga School,” said Roth, 22. “The price of the entire program, flight, food, and lodging was cheaper than any class offered in the United States.”

Before she knew it, her trip was planned. Within eight weeks Roth would be a certified yoga teacher.

During the trip, Roth lived in a tiny jungle bungalow along with cockroaches, mosquitos, lizards and ants. The presence of these critters was second nature by the end of the trip, she said.

Roth learned several aspects of yoga during the eight weeks that she carried back with her to the United States. Shakti’s program provided Roth and 14 other students with knowledge on the philosophy and history of yoga, alignment of the postures, meditation and several other lessons.

In the near future, Roth plans on starting her own yoga business called Meditating Stickman, Inc. The business will be based on yoga and wellness through private yoga sessions. Roth believes private sessions will allow the practitioner to work toward his or her own yoga goals.

“In my experience I found that I wanted more personalized attention and feedback so I could learn the proper alignment of the poses and apply that to my practice,” Roth said.

Roth is preparing to start her business and is accepting requests for private yoga sessions. For more information, contact Roth at MeditatingStickman@gmail.com.