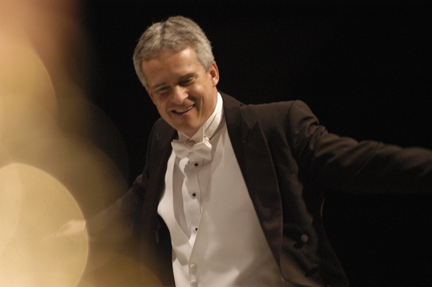 It’s a big year for the Carmel Symphony Orchestra as it celebrates its 40th birthday with a season of eight concerts that, while spanning the musical spectrum, share one thing in common.

“David Bowden, our artistic director, programmed the concerts so that every concert would have something about it that would be a celebration — a piece of music that’s very upbeat and celebration-minded or that’s just fun,” Carmel Symphony Orchestra CEO Dr. Alan Davis said.

The celebration begins with a concert aptly titled “A Community Celebration,” set for 6:30 p.m. Saturday, Sept. 12, at The Palladium.

“We looked at different things to do for the 40th and of course everybody originally gravitated toward a black-tie, fancy-dress dinner, dance and auction sort of celebration thing,” Davis said.

Tickets for the season-kickoff concert are just $10 for adults and $5 for students.

“That will allow people who might not normally come to the orchestra to come and sample what we do and they may find out they really like it,” Davis said. “And we’re having dessert afterwards. We’re having birthday cake to kick off our 40th anniversary.”

The show will feature a selection of both classical and pop music’s greatest hits, with shorter pieces making for a constantly changing, celebratory atmosphere.

“We’ll run the gambit from Beethoven all the way through music from ‘Wicked’ and big-band pieces,” Davis said.

Audience members will also be treated to a pair of special guests — one being Carmel Mayor James Brainard, who will guest conduct one piece in place of Bowden.

The other guest is pianist Di Wu, who was also a part of the orchestra’s first notes at The Palladium five years ago. For more information, visit carmelsymphony.org.