You are at:Home»Current in Zionsville»BCSSI Olympics keeps seniors on the move 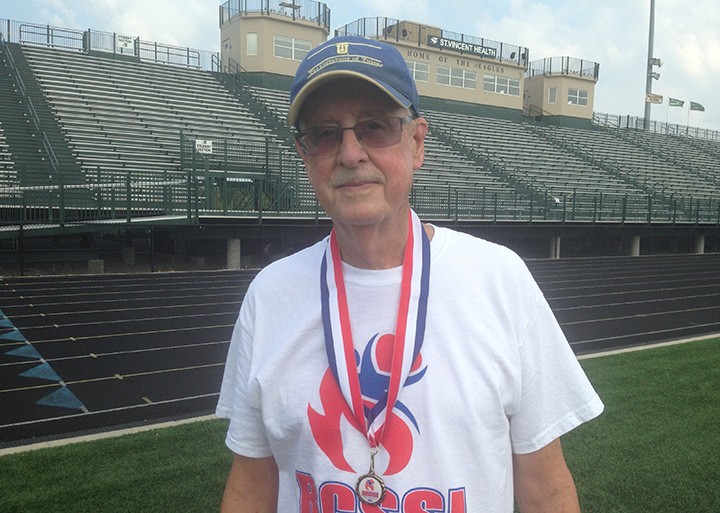 Duane Kyler displays a medal he won in the BCSSI Olympics. (Photo by Mark Ambrogi)

“I’ve been exercising ever since to get into shape,” Kyler said.

Kyler, 70, found a good way to do it by participating in the inaugural Boone County Senior Services Inc. Olympics.

The Whitestown resident finished second in the age 70-79 division in the one-mile walk and the softball throw at Zionsville Community High School on Sept. 1. The following day Kyler took part in the BCSSI golf tournament at Fairway Golf Course in Lebanon.

“Exercise is the best way to stay young,” Kyler said.

There were 12 participants in seven events in the track and field meet. Ed Moffitt said since he has worked as a Boone County Senior Services driver for three years, it was natural for him to sign up for the competition.

“I want to encourage people to do it more. It’s a lot of fun and good for those age 60 and older,” said Moffitt, who lives just outside Thorntown. “Just participation is the main thing.”

“I’ve not run these distances here since high school, so it’s been about 45 years,” said Moffitt, who went to Thorntown High School (which merged into Western Boone).

Carol Zuccaro, a 73-year-old Whitestown resident, competed in the one mile-walk and 200 meters.

“I’m going to do it next year,” said Zuccaro, who exercises regularly in the Silver Sneakers program though Witham Health Services. “I should be in better shape.”

Members of ZCHS track and cross country coaching staffs helped with the event.