You are at:Home»Current in Westfield»Supt. Keen: Westfield entering ‘golden decade’ 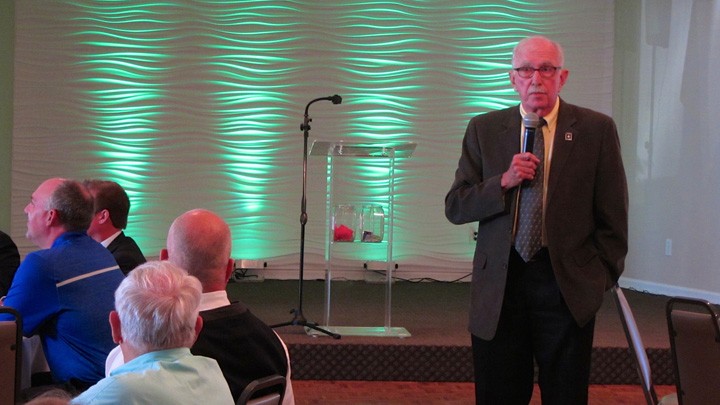 Supt. Dr. Mark Keen spoke on Westfield Washington Schools’ goals for the next five years during his Aug. 20 State of the Schools address. (Photo by Navar Watson)

Mark Keen has served as superintendent at Westfield Washington Schools for 18 years, but according to him, the best years are still ahead.

Since 1997, the district has jumped from 2,400 to 7,000 students and gained five buildings. Keen noted several other accomplishments at the Westfield Chamber of Commerce luncheon, many pertaining to high test scores.

He pointed out growth on NWEA scores for almost every grade level, with math being the most successful. Students take NWEA assessments at the beginning and end of every year.

Unlike other schools, Westfield requires AP students to take the AP exams.

“We make everybody take it and still over 80 percent of our kids are passing and getting college credit,” Keen said. “That’s still astonishing to me.”

Keen also outlined his goals for the next five years. The current five-year strategic plan ends after this year. It focused on growth in three areas: NWEA, honors diplomas and AP passing rates.

The goal to see 56 percent of students graduate with honors diplomas has yet to be fulfilled.

By 2020 Keen hopes to see 1,000 more students, 40 more teachers and potential plans for a senior center, which would operate like a college campus. Teachers will also continue integrating technology in the classrooms, mainly via iPads.

More online courses will be offered in the future, though that’s not a primary focus.

“I cannot tell people enough that you cannot do an education online,” Keen said. “The human interaction – the ability of the teacher to adjust instruction to work with students at the level they’re at – has to be there.”

The future looks bright financially, too, Keen said. The state started supporting the schools and straightening out class sizes last year. Westfield’s developments in Grand Park will also expand the tax base and attract more residents.

“I think it’s going to be a better year than we’ve ever had before,” Keen said.