You are at:Home»Current in Geist»Fishers residents open fitness concierge business 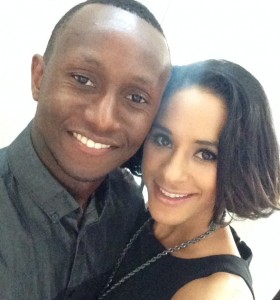 Jennifer and Desire Gabou come from big-time athletic backgrounds. So it is fitting the Fishers residents bring the first fitness concierge business to Indiana.

“For one flat fee, our members have unlimited fitness classes at 40 studios and gyms in the Central Indiana area,” Jennifer said.

The business, OPEN GYM, goes fully online on Sept. 8 and will be operated from Launch Fishers. Members sign up and see the whole schedule of offerings at various locations. All the studios and gyms are independently owed in the area. Members pay a promotional fee $79 per month.

“They can book their class throughout the Indianapolis area through our technology,”

Jennifer said. “The classes include everything from horseback riding, yoga, rock climbing and cycling. We offer all kinds of fun things to do in the area. This concept is wildly popular in the big cities, New York City, Chicago and Los Angeles. We’re so excited to bring this to the state of Indiana. We’re proud you don’t have to live in a big city now to have this opportunity to exercise in your community.”

Jennifer, 31, whose maiden name is Magley, played tennis at the University of Florida and professionally on the WTA Tour for about two years.

“It was really nice to see the world,” said Jennifer, who served as Florida Gulf Coast

Desire, 30, played professional basketball at the Ivory Coast. They met when her brother, D.J., and Desire, who is from Ivory Coast, were basketball teammates at Western Kentucky.

“He was a big-time dunker for Slam Nation (a French dunking team who performs),” said Jennifer, who has two boys ages 3 and 1. “So he was recruited to play at Western Kentucky even though he never played organized basketball before.”

High School who played at Kansas.

Jennifer said the gym’s goal is to have classes all over the Indianapolis area. Most of the classes now are in Fishers, Carmel and north side of Indianapolis.