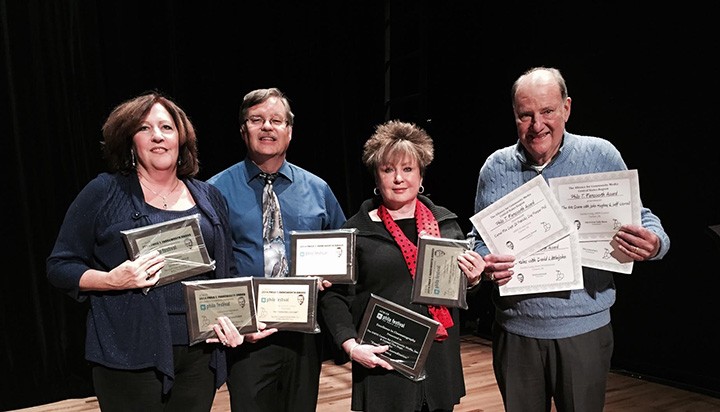 From left: Jan Howard, Norm Comptom, and Sandra and Winston Long at the Central States Region in 2014. (Submitted photo)

Omni Centre for Public Media and the City of Carmel won the 2015 Hometown Media Award for Overall Excellence in Government Access Programming from the Alliance for Community Media. It was the third time in four years that Omni has captured the overall general excellence award. The award is based on the 20-minute sampling of all the videos.

The Omni Centre is run by Carmel residents Sandra and Winston Long. Sandra serves as president and Winston as vice president. The award will be presented Aug. 13 in Pasadena, Calif., but the Longs are unable to attend.

“We enjoy producing videos for the city,” Sandra said. “It’s a competition and there are judges around the country who review the videos that have been submitted and they make the decisions and it’s based on points.”

“I think one reason why we won is the city gives us a lot of variety in what we can use,” Sandra said. “I think that’s one thing the judges look at is variety and not just the ability to do one thing.”

Sandra said their company has been working with Carmel for 15 years, but did not start entering the competition until the last few years.

“We started winning and we decided we should keep submitting them,” Sandra said.