You are at:Home»Current in Geist»Meet your leaders: Amy Vaughan 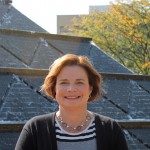 As the Hamilton County Leadership Academy approaches its 25th anniversary in 2016, Current is highlighting local leaders who have helped build and sustain the program, which focuses on strengthening our community by developing informed leaders. In June, another class of engaged citizens will join 600-plus graduates already working to make a difference.

Career: Now a clinical assistant professor in IUPUI’s Tourism Convention and Event Management Department, Vaughan has decades of destination-marketing experience – both in Hamilton County and as director of the Indiana Office of Tourism Development.

Nice to know: Vaughan was on the team behind the Super 46 Sandwiches project, which encouraged visitors to Super Bowl XLVI in Indianapolis to skip the chains and eat local by promoting the state’s best sandwiches. Her go-to choice – the breaded tenderloin at Fishers’ Nickel Plate Bar & Grill.

Most vivid HCLA memory: “The poverty exercise was very impactful for me. I have never forgotten that experience. Each participant assumed an identity, was given play money with bills to pay and activities to pursue. I was struck at the time by how vividly the exercise brought to life the choices some people are forced to make every day. Often, none of the choices were good.”

Most impactful connection made through HCLA—and why: “I met [County Commissioner] Christine Altman through HCLA. I admired her leadership skills, sense of humor and sense of community. I found her to be an inspiring role model. We became good friends, and years later she married my husband and me.”

Last movie you saw? “Inside Out,” in the theater.