You are at:Home»Current in Carmel»Carmel Community»Internship gives CHS grad close up look at reality TV 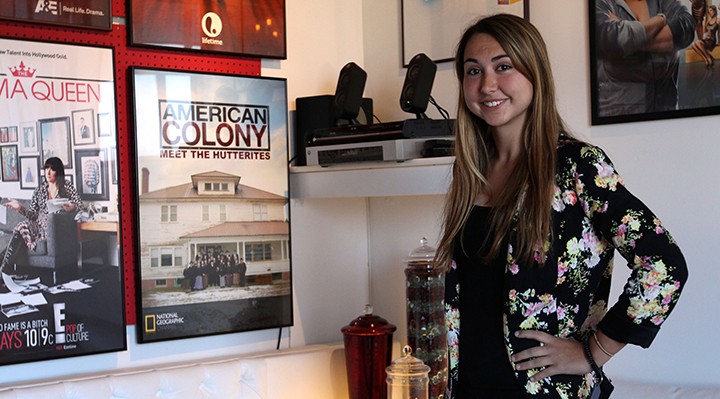 Sydne Horton spent the summer learning about reality show production through an internship with the Television Academy Foundation. (Submitted photo)

Since graduating from Carmel High School in 2013, Sydne Horton has been studying television directing and producing at Columbia College in Chicago. This summer she got to put her skills to the test in the real world through an internship with the Television Academy Foundation.

Only 30 to 50 students are selected for the prestigious internship each year, and Horton knew it would be a longshot to get accepted. Still, she completed the lengthy interview process, which included an essay, letters of recommendation, transcripts and a video interview.

Her hard work paid off, as she was selected to participate in the reality division. She’s been working with Collins Avenue Entertainment, which produces shows that include Dance Moms and Raising Asia.

“They’ve been so awesome. They’ve let me shadow story producers, work with casting and help out with production,” Horton said. “I was surprised with how much creative control they’ve given me. I help them pitch new show ideas, or I’ll research information for show ideas they’re trying to sell to networks like TLC or Lifetime.”

Horton had previously studied the production of unscripted shows in a college course, where she found success.

“We had to pitch reality-based competition shows. On the fifth week of that class, we all had to decide to pursue two of those ideas and compete against each other,” she said. “My idea was chosen for one team, and we produced it all the way through. Our final was to pitch to two actual network producers. They decided which one they would actually want to buy and which would sell in the real world.”

Horton will return to Columbia College for one more year, but hopes to work with the Collins Avenue Entertainment in the future. Her end goal is to become a story or line producer. Even though she loves the reality segment, she’d love to eventually get into scripted television.