You are at:Home»Current in Zionsville»Bloor Lane reopens as roundabout construction continues 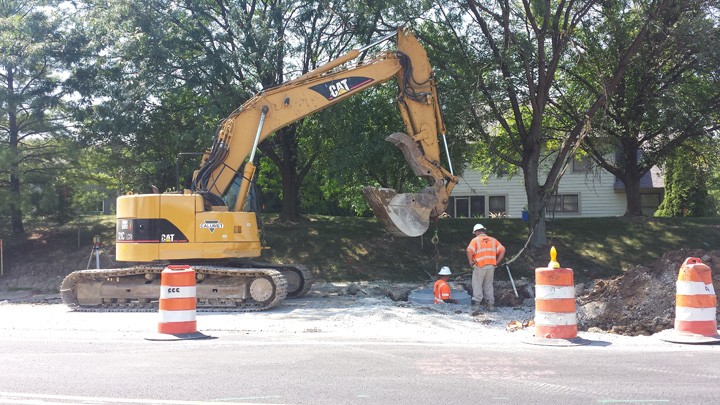 Crews work to install a pipe as part of the roundabout construction project. (submitted photo)

Closed since early June, Bloor Lane reopened just in time for the new school year as construction on the roundabout at the intersection of Bloor and Ford Road is progressing.

“The construction process has been completed on the east side of the roundabout,” said Lance Lantz, Zionsville superintendent of street/storm water services. “We have made accommodations to reopen Bloor and open the intersection back to a three-way intersection, and the contractor will move to the west side and build that portion of the roundabout. That allows full access to the intersection for buses and people traveling to school.”

The close proximity to Zionsville Community High School is why a roundabout was chosen over a traffic signal when it came to improving the intersection, which Lantz said had reached an unacceptable level of service.

“Traffic signals can be timed to different traffic loads throughout a day, but when you’re close to a high school you have abnormal traffic patterns that signals cannot anticipate,” he added.

At the Aug. 11 school board meeting, Zionsville Community Schools superintendent Dr. Scott Robinson thanked the street department for getting Bloor Lane reopened in time for the new school year.

“The street department has been great partners through this whole thing,” ZCHS principal Tim East said. “There was a performance contract written that this had to be accessible by the start of school, so we’re very thankful that (occurred).”

Once construction on the western portion of the roundabout is complete, crews will move back to the eastern side for finishing touches. During that phase of the project, Bloor will remain open during the morning, after-school and evening commutes, but will be closed again during school hours. The project is aiming for completion in mid-September, Lantz said.