Rock and roll is coming to the blacktop for the third annual Rock the Lot event, presented by Carmel’s School of Rock.

Free to the public, Rock the Lot brings a number of music acts taught and organized by the school in a showcase of talent. Performers from as young as 7 years old to adult will play a mix of ‘British Invasion’ music, Hendrix, Led Zeppelin, the Doors, as well as a variety of summer-themed songs. 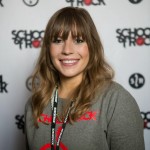 “This is another show where the kids show off what they’ve been learning throughout the season,” Elyse Causey, general manager for School of Rock said. “The final show “Rock the Lot” will be our older group performing a tribute to Frank Zappa.”

Causey believes the School of Rock provides students a far more comprehensive education by allowing them to perform live.

“They will learn a lot more than they ever could in a private or classroom setting, so the one thing we really emphasize is performing live,” Causey said. “We think it’s a really great teaching tool. It’s also a great incentive to work towards. They know they’re going to have to perform in front of hundreds of people, friends and strangers. It gives them a reason to work really hard during the season. Sometimes they come in pretty shy, but getting up there like that really helps a lot with their confidence.”

Rock the Lot will also feature a variety of food vendors, including the Jamaican Reggae Grill, which shares space alongside the School of Rock in the Monon Shopping Square.

Attendees can also enter a raffle to win a black Epiphone Les Paul Jr. Tours of the school will be provided to interested patrons.

Rock the Lot begins August 15 from noon to 5:30 p.m. at the Monon Shopping Square at the corner of 126th Street and Range Line Road.