You are at:Home»Current in Geist»Foxgardin Kitchen opens in Fortville 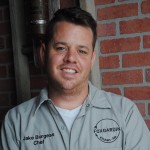 Some dream of being honored by their hometown with a homecoming, but few may think to open a business to pay it homage. Just opened on July 10 in Fortville, Foxgardin Kitchen and Ale is a restaurant opened by a Fortville native.

“It was the talk of the town [for]the next week or so,” said Jake Burgess, owner of Foxgardin.

Burgess is referring to the grand opening of his restaurant. Up to 600 people were in attendance during the opening, with a live band playing for entertainment.

Being no stranger to Fortville, Burgess grew up near the restaurant.

Burgess worked at Prime 47 as an executive chef before opening Foxgardin. Wanting to keep everything simple, Burgess tries to get his ingredients locally.

“I got farmers coming in daily with ‘Hey, I got this, I got that.’ The lettuces, onions and peppers and all that sort of stuff,” said Burgess.

Also offered are several different, locally sourced craft beers. The menu consists of a variety of options. According to Burgess, there is no set definition for the style of food served, but he calls it “Chef’s food.”

“There’s no real definition for it,” said Burgess “I mean I’d honestly call it, ‘Chef’s food,’ the food I like to eat, the food that my friends like to eat. The food people always want to know, like ‘What did you have for lunch? You’re a chef.’ I had nachos, but I didn’t have any ordinary nachos. I made the chips. It took me six hours to have nachos, but I had nachos. So that’s the kind of food that I’m serving. That’s what I’m trying to do.”

Paying homage to his mother, Burgess explains why he decided to name the restaurant Foxgardin.

For more information on Foxgardin, visit their website at http://www.foxgardin.com/