You are at:Home»Current in Westfield»Fieldhouse breaks ground 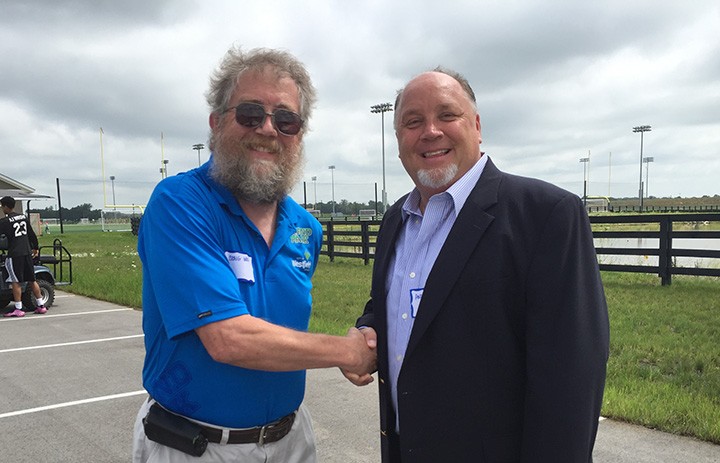 With soccer, baseball and football already quite prevalent at Grand Park, many have questioned when the beloved sport of basketball would join those ranks.

As of July 15, they now have an answer after a groundbreaking ceremony for the Jonathan Byrd’s Fieldhouse, an 88,000-square-foot facility that will allow basketball and volleyball teams to join the other players of the park.

“A question I get a lot is ‘Aren’t we in Indiana? Where’s basketball?’” Westfield Mayor Andy Cook said at the ceremony. “We are absolutely thrilled to be having this complex here at Grand Park because it really fulfills a huge challenge.”

Cook personally thanked Craig and Sandra Wood, the owners of the land that the city purchased for the fieldhouse. The Wood family was present at the groundbreaking ceremony, and they sang the National Anthem together.

“Craig and Sandy have been very gracious about working with us,” Cook said. “They’ve been farming here for years, but now we will be growing a different kind of crop. When you see the hundreds of kids out here on any given day and they don’t have their eyes on an iPad and they are learning with their families … we are growing a very important crop right here.”

Andy Card, an investor for the fieldhouse, also spoke at the ceremony.

“We will set the high water mark for fieldhouses in the United States,” he said.

Once finished, the building will hold eight courts for volleyball and basketball, seating for 2,500 to 3,000 spectators, a food court and a concession area.

Despite construction just beginning, the new fieldhouse already has events and tournaments booked as soon as it opens its doors. The Jonathan Byrd’s Fieldhouse will be completed by January of next year.

The fieldhouse is projected to bring 100 jobs and multiple millions of dollars into the city’s economy.