You are at:Home»Current in Fishers»Archer’s Meats is in the fabric of Fishers 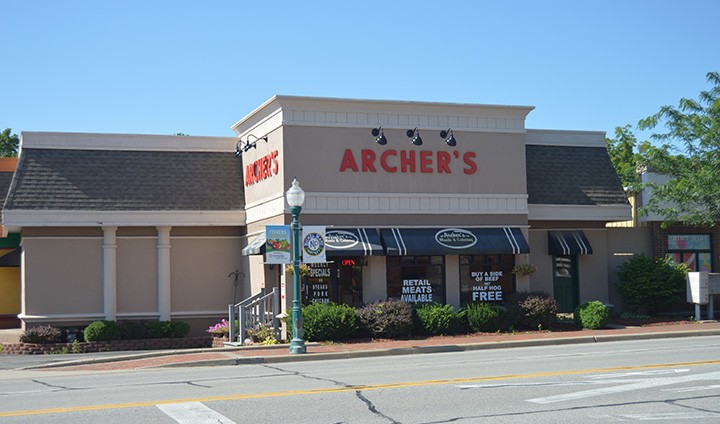 In 1969, Fishers had no stoplights or a police station. But in that day, there were 985 people living in the town, a volunteer fire department and Archer’s Meats. Although owner Ron Archer started his quality meat market and butchering business first in Greenwood and Zionsville in 1966, he moved the Zionsville location to Fishers, a mere three years later. It was the first business to open in downtown Fishers, where it remains and thrives today.

“All I’ve ever done all my life is the meat business. I started meat at age 16,” Archer said. He is actively involved in the business today, along with his wife, Michele, and general manager Denise Weaver.

The retail meat selection is vast, much of which is prepared at the shop.

“We offer all kinds of sausages, gourmet hamburger patties, different bacons, smoked meat,” Michele said. “We pride ourselves on getting meat with no antibiotics and no steroids. Most of it is organic.” The shop also retails organic chicken, and can special order seafood upon request.

The store management also makes an effort to reduce waste from the butchered animals. “We donate eyes to teaching facilities learning how to do laser surgery. We donate pancreas to medical institutions that are dealing with diabetes. We give blood for people who are fighting blood diseases,” Michele said. She explained that the business donates as many organs as possible.

“We also own what they say is the oldest home in downtown Fishers. It is on the railroad tracks here, right behind the store,” Michele said.