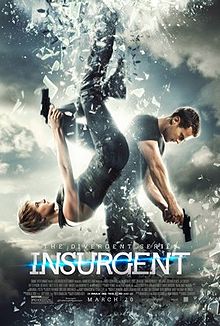 “The Divergent Series” may just be a cut-rate rip-off of “The Hunger Games,” but I still prefer it to the original YA dystopian future where photogenic teens hold the key to salvation.

The Divergent movies seems less self-serious, throwing you winks that it understands how goofy this all is — contrasted with the unrelentingly grim “Games.”

In this second installment, Tris (Shailene Woodley) has emerged as the face of the rebellion against the Erudite faction that rules a post-apocalyptic society centered around the remnants of Chicago. She’s divergent, meaning she contains more than one of the attributes of the five different factions.

For the crime of being different, Tris and her friends are being hunted down, on the lam and hiding out with the pacifist Amity clan. Needless to say, trouble soon catches up with them. Tris is forced to undergo a series of trials designed to break her will. It’s essentially a series of technology-induced nightmares in which she must overcome impossible odds. Very Matrix-y.

Four (Theo James), Tris’ fellow divergent and dreamy boyfriend, is along for the ride again. Kate Winslet huffs and puffs as the evil Erudite leader.

“Insurgent” won’t win any awards for originality, but it’s fun and fast-moving.