You are at:Home»Night & Day»Students bring Mary Poppins to the Summer Stock stage 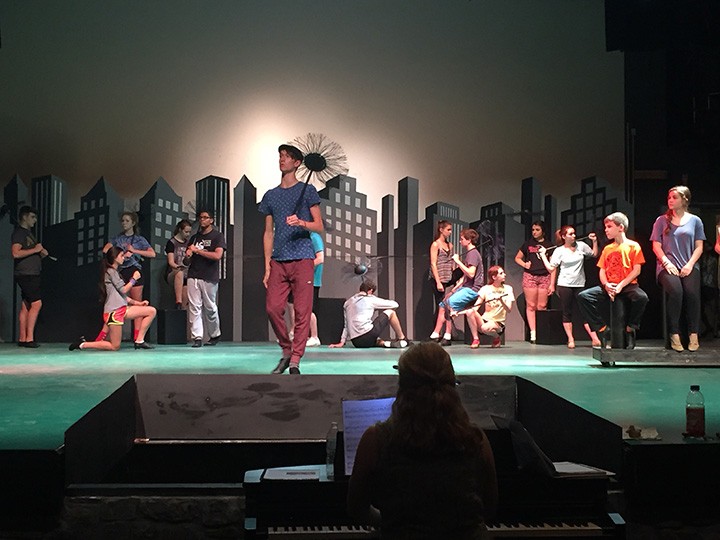 This summer, audiences and high school performers alike will get to take a jolly holiday with Mary Poppins and her chimney sweep friend Bert.

The event will be featuring performers from the ages of 13 to 18 from a bevy of local schools, including Carmel, Fishers, Zionsville and Westfield.

According to Emily Ristine Holloway, director and Summer Stock founder, she chose the show for its ability to include as many students as possible.

“We try to do shows that are a little bit more ambitious than what people typically do in their high schools, and also shows that provide lots of opportunities for multiple leads and large ensembles so that we can include as many students from the community as possible,” Ristine Holloway said.

Ambitious is a good word for “Mary Poppins,” a crucial feature of which is having the actors who play magical nanny Mary and lovable chimney sweep Bert fly or walk upside-down, respectively, across the stage.

“Mary Poppins flies, and then Bert also does a proscenium walk where he walks up the side wall, walks upside-down across the top and walks (back) down in ‘Step in Time,’” Ristine Holloway said. “Similar to Peter Pan, Mary Poppins has to have that magical quality, or the story can’t really be told.”

According to Elizabeth Hutson, who plays Mary, and Matt Conwell, who plays Bert, flying on stage is just as intimidating as it sounds.

For “Step in Time,” Conwell is attached to a metal square approximately one foot, which is then hooked up to a conveyer belt to move him as he tap dances upside-down across the proscenium.

“I cried when she told me I would do it, because I didn’t think it was going to happen,” said Conwell. “It’s scary, but I’m too excited to be that scared.”

Hutson said another intimidation factor is finding a way to put her own spin on a beloved character originally played by the likes of legendary actress Julie Andrews.

However, Hutson’s history with Summer Stock – she played Anna in last year’s “The King and I” – helped ease her into this new role.

“I felt a lot of pressure last year with Anna, and so this year, it’s kind of relaxed a little more for me,” Hutson said. “I just need that (relaxation), because if you start thinking about it too much, you jazz yourself out.”

Conwell said he felt more excitement than pressure at the idea of taking on the character of Bert.

“It’s so much fun to play these iconic roles and to put you own spin on it,” Conwell said. “That’s what every actor dreams of, I feel like: to be able to put your mark on something so beloved.”

Conwell, Hutson and Ristine Holloway said they’re all excited for audiences to see their hard work come to fruition – especially in tricky dance numbers, including “Step in Time,” “Jolly Holiday” and “Supercalifragilisticexpialidocious.”

“I’m excited for people to see how we spell ‘Supercal’ with our bodies,” Hutson said. “It goes faster and faster and faster. You’re spelling it with your body the whole time. It’s ridiculous.”

Overall, Hutson said she can’t wait to take the stage.

For more information, including how to purchase a ticket, visit www.summerstockstage.com.