You are at:Home»Current in Westfield»Aspiring Eagle Scout builds swing for the Monon 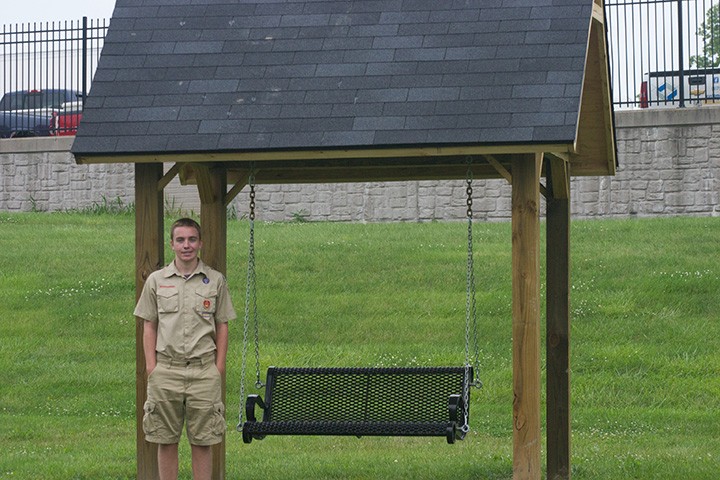 Andrew Bredensteiner says he will dedicate the covered swing to his late father, Jeff. (Submitted photo)

The swing was the project Bredensteiner had selected as his service project to attain Eagle Scout level, and they planned to build it on the Monon trail in Westfield.

That plan was tragically shattered when Jeff suddenly and unexpectedly died on Feb. 5 at the age of 46.

Although still coping with the loss of his father, Bredensteiner has completed the construction of the covered swing after a year of planning and work. He will dedicate the swing in his father’s memory.

“Without my scout leaders, Jim Hester and Kevin Mershimer, I would have never been able to do this. They filled in where my dad left off,” Bredensteiner said.

“Raising all of the money took the longest time,” he said.

Bredensteiner worked with the City of Westfield Parks and Recreation Department to choose the location and design of the swing. He made some modifications to the construction plans provided, resulting in a larger, sturdier swing.

Bredensteiner originally chose the covered swing project because he wanted to create a lasting monument that could be enjoyed by the community long-term. He passed on other options such as trimming or mulching portions of the Monon, which surely would fade away as autumn approached. As fate would have it, Bredensteiner’s lasting monument will now serve to commemorate the 14 years he was able to spend with his father.