You are at:Home»Current in Fishers»Indy Eleven on tap at Fishers pub 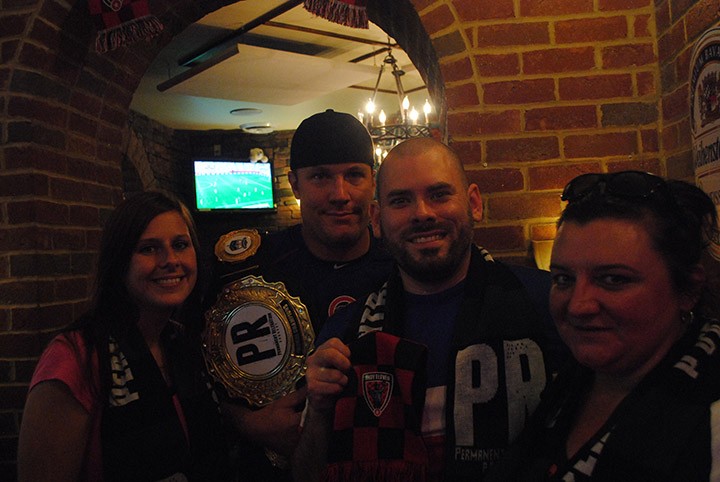 The Chatham Tap in Fishers is typically buzzing during Indy Eleven games.

The crowds are especially big for the watch parties for away games. The English-themed pub puts the streaming version of ESPN 3 on several TVs.

“It’s an incredible place to watch,” Fishers resident Chris Ball said. “I’ve been coming here for years to watch. I’ve been a long, long-time soccer fan. Besides Indy Eleven, all throughout the year they support all the major leagues around the world. You can come for breakfast, get kegs and eggs. Then come back at night for Indy Eleven. It’s a perfect way to spend a Saturday. Look at the decor, this is what embodies the sport.”

Ball and Andy Baumgartner, a Carmel resident, run a Permanent Relegation podcast (permanentrelegation.com) on the Indy Eleven every other Tuesday at the Fishers pub, 8211 E. 116th St. The duo interviews Indy Eleven players and coaches.

Ball said both Chatham Tap locations, the other location is in on Massachusetts Avenue in downtown Indianapolis, and Union Jack’s Pub in Broad Ripple have watch parties for every away game.

Ball and Baumgartner were part of full house watching Indy Eleven and U.S. winning the Women’s World Cup on July 5 at the Chatham Tap in Fishers.

“We’ve probably come to every away viewing they’ve had and the staff here is very welcoming,” Carmel resident Rebecca Johnson said.

Laura Pendergrass, Fishers, said she has become even more of soccer fan, especially the Indy Eleven, since becoming friends with Ball and Baumgartner.

Carmel resident Ryan Clarke has attended a few Indy Eleven games at the stadium and has also attended some watch parties,

“This is just a good atmosphere,” Clarke said.

Mike Harvey was part of group from Whitestown watching the games.

“It’s a great place to watch soccer but it’s a little hard to do with both games going on,” Harvey said. “I was here for another Indy Eleven away game and it wasn’t quite as packed as this but almost.”

Daniel Jones, who is a co-owner of both Chatham Tap locations, said the Fishers bar gets a bigger turnout to watch Indy Eleven away games.

“One reason might be more families because we allow all ages at Fishers so it’s a broader audience we reach,” Jones said.

The downtown location is for 21 and over.

In addition, Hamilton County and Zionsville are soccer hotbeds.

“A lot are season ticket holders for Indy Eleven who want to watch the away games together or with people they see at the stadium,” Jones said. “It’s a lot of the same people every away game.”

“The downtown location we can get more business after the home games from fans coming in,” Jones said.