You are at:Home»Current in Fishers»Construction at Lantern Rd, Commercial intersection 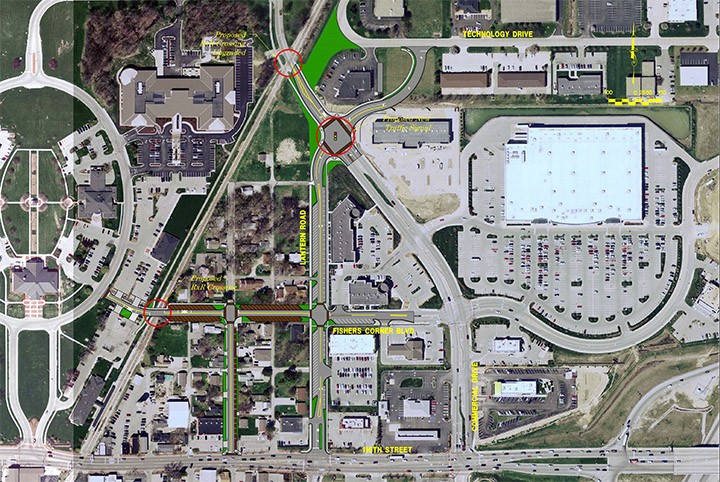 An overview rendering of the completed construction at Lantern Road and Commercial Boulevard. (Submitted rendering)

As the temperature rises and summer begins, so does the construction crew’s busy season around the city. One project that began last week on July 6 is the infrastructure improvements at the intersection of Lantern Road and Commercial Boulevard. The project will realign a troubled intersection and improve traffic flow through the area.

“This project is an integral part of the downtown master plan,” said Mayor Fadness. “As activity in the Nickel Plate District increases, we’re committed to pursuing projects that ease the flow of traffic, offers better pedestrian connectivity and improves access to local businesses.”

The end result of the project will create a four-way, signalized intersection at Lantern Road and Commercial Drive. Scopes of the construction include relocating the entrance of the Northeast Commerce Park, Technology Drive, to the south to align with Lantern Road. In addition, the stop signs at the railroad crossing will be removed and crossing gates and flashers installed. Pedestrian infrastructure, including crosswalks, Americans with Disabilities Act-compliant access ramps and sidewalks will be installed as well.

Construction is expected to last until November 2015. The project is estimated to cost $1.8 million. Traffic will be maintained throughout the project on Commercial Drive with periodic lane closures expected as needed.