You are at:Home»Current in Westfield»Three Westfield neighborhoods rival in swimming 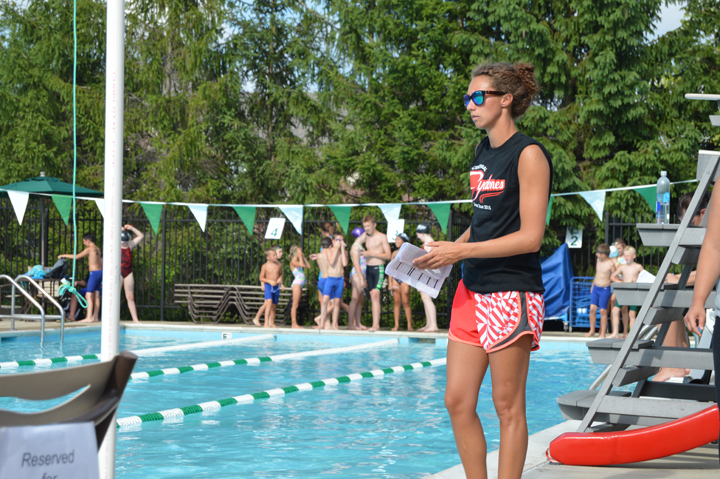 Jillian Bischoff coaches more than 80 kids in the Centennial neighborhood of Westfield. (Photo by Michelle Williams)

Jillian Bischoff, a 23-year-old employee at Pyle’s Pools, coaches a swim team of 83 kids ranging from ages 4 to 14. Her team is not part of a school, and it is not a community wide league — her team belongs to the Centennial neighborhood in Westfield.

Part of the CMC Swim League now in its fifth year, Centennial competes against teams similar in size from the neighborhoods of Merrimac and Countryside.

The league is still growing, and organizers have reached out to Spring Mill Ponds and Viking Meadows, encouraging the nearby neighborhoods to join in on the events.

Each team competes against the other, twice per season — once at home, and once away. There are 58 events that make up the season, and each event typically lasts around four hours. Parents serve food on the sidelines in between.

Bischoff said that kids come to the team with varying ranges of skills. Most children 7 and older already show a basic understanding of traditional swim strokes including freestyle, back, breast and butterfly. Younger children typically require more lessons and coaching, although they do not compete in the breaststroke events and swim only a half-length of the pool.

Bischoff was approached two years ago about the coaching opportunity through her employer — the company that manages the neighborhood pool in Centennial. She previously swam competitively up through college for 16 years, attending Ball State on a four-year swim scholarship. She graduated in 2014 with a degree in Elementary Education.

“I have a true passion for teaching and swimming,” she said. “Then last summer I was given this amazing opportunity to coach, and that is when I knew that I chose the right profession, and that swimming and kids were my passion.”

Bischoff said she wakes up every day with a smile on her face and enjoys serving as a role model for the kids.