You are at:Home»Current in Fishers»New pastor joins Lutheran church 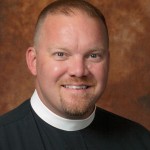 Christ the Savior Lutheran Church gave their new pastor, Brian Derrer, a warm welcome for his first service on June 21.

Derrer, who had a good hunch that he would be a pastor ever since high school, said he felt that he was being called to the church. The church, at 10500 E. 126th St., Fishers, required a move for Derrer and his family.

“I grew up with church as part of life, and I had great congregation growing up,” Derrer said. “A lot of my family’s deepest connections and friends were through church.”

Derrer’s own uncle served as a pastor, which helped him realize that pastors are just real people.

“I love God and I love people, and the natural marriage of those things is to be a pastor in the church,” Derrer said.

The church accepted their new pastor with open arms, and Derrer said he joined a great staff.

The same day Derrer entered the church, they hired a new director of youth and family ministry. “Our staff is at full strength and is excited about working together. The congregation has warmly welcomed both of us. [June 21] was the first day of leading worship,” Derrer said. “Energy was high and the feel of the Holy Spirit’s presence was wonderful.”

In his free time outside of the church, Derrer enjoys spending time with his wife and three kids doing anything outdoors ranging from playing golf and tennis to riding his motorcycle when the weather is nice.

“We’ve settled in Fishers and are really enjoying our first introductions to this community,” Derrer said. “We got to the Fishers Farmer’s Market and are excited with that, and we are looking forward to getting engaged with all kinds of things Fishers has to offer.”