You are at:Home»Current in Fishers»HSE graduate to appear on ‘Jeopardy’ 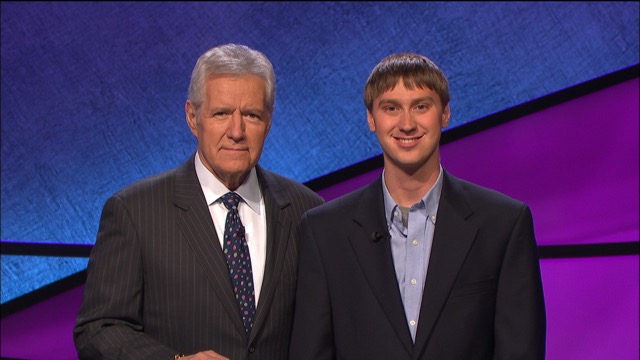 Sawyer Morgan isn’t able to pinpoint an age when he started watching Jeopardy.

“I just remember always watching it since I was little,” he said. “I was young enough that I could have been on kids version. There is one week for 10 to 13 years old (contestants). I was probably younger than that when I started.”

Morgan, a 2011 Hamilton Southeastern High School valedictorian, achieved a long-time dream of being on the show with an episode taped on April 1. The show will air at 7:30 p.m. on July 7 on WTHR-13. Morgan, 22, is returning home from Washington D.C. to Fishers to have a viewing party with family and friends. Morgan, who is serving an internship doing research for the National Institute of Standards and Technology, is not allowed to reveal the result until the show airs.

“It was really fun to see what the set was like and to meet Alex Trebek and the contestants,” Morgan said. “The contestant coordinators were really fun as well.”

Like most fans, Morgan tried to beat the contestants by shouting out the answer to the TV.

“The difference at home is you can shout out the answer as soon as you want,” Morgan said. “The hardest thing about being on the show is being able to get the buzzer right. You can’t answer until Alex is done reading. If you buzz in to early, you get locked out for a quarter of a second and someone else might beat you.”

There was a practice round in the morning, trying out the buzzer.

Morgan took the online test a few times before being selected. He was selected from January 2014 online test and did well enough that was invited to audition to Chicago two months later for a written test and practice game.

“I had to wait a year before they called me in February to invite me to Los Angeles,” Morgan said.

Morgan said his strongest categories are geography, politics and government.

“So I was lucky enough to get a few of those questions on the show,” Morgan said. “Pop culture I’m pretty bad at.”

Morgan, who had never been to the Los Angeles area before, would love to be on another game show.

“I’m not allowed to be on Jeopardy again,” he said. “You can only be on it once. But I would definitely try out for some other shows.”

“I want to do some research in industry, something energy related,” Morgan said.

“He’s always been the type of kid that likes to do trivia,” said his mother Leslie Morgan.