You are at:Home»Current in Zionsville»Column: Brandenburg Gate: Symbol of Unity 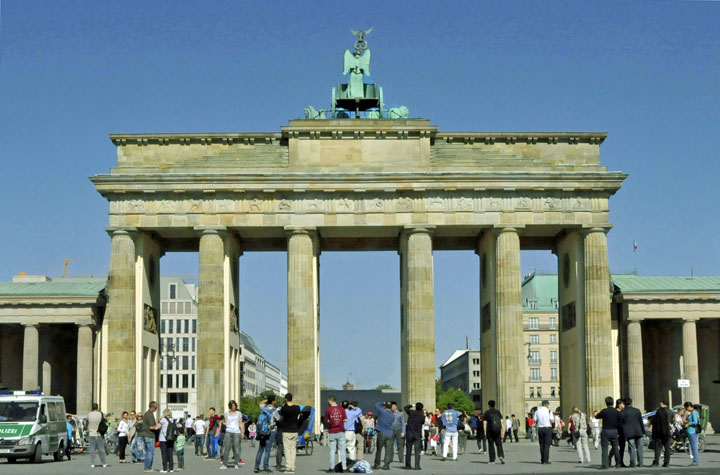 Berlin’s Brandenburg Gate from the West. (Photo by Don Knebel)

For nearly 30 years, Berlin’s Brandenburg Gate was a symbol of division. It is now a symbol of German pride and unity.

In about 1788, Prussian King Frederick William II ordered construction of a monument to peace at the western end of the Unter den Linden, a tree-lined boulevard that led to his palace. His architects designed an 85-feet high triumphal arch modeled on the entrance to the Athens Acropolis. The 213-feet wide gate, now known as the “Brandenburg Gate, was completed in 1791. Six pairs of Doric columns form five passageways, the center one originally reserved for royalty. The chariot of the quadriga atop the arch was formerly driven by Eirene, the Greek goddess of peace. When the Prussians defeated Napoleon in 1814, they replaced Eirene with Victoria, the winged goddess of victory.

On June 26, 1963, President John Kennedy spoke just west of the gate, uttering the now famous words, “Ich bin ein Berliner” (“I am a Berliner”). On June 12, 1987, President Ronald Reagan, with his back to the Brandenburg Gate, demanded that Soviet Leader Mikhail Gorbachev “open this gate” and “tear down this wall.” Twenty-nine months later, the wall fell. On December 22, 1989, the Brandenburg Gate reopened.

Today, the Brandenburg Gate is accessible only to pedestrian traffic and opens onto Pariser Platz, a public square where Berliners celebrate their freedom and unity. Residents traveling past the Brandenburg Gate are reminded of their past by more than a dozen white crosses hanging on a fence aside the Ebertstraße. Each cross bears the name of a person killed trying to cross the street that once divided the now-united city.