You are at:Home»Current in Zionsville»Caucus names Tim Haak mayoral candidate 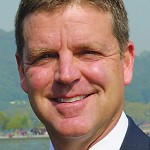 The Republican Party caucus nominated councilman Tim Haak as its mayoral candidate for the November elections June 26, making him the first and only candidate so far.

The Democratic Party had until June 30 to declare a candidate and the Independent Party has until July 15.

“It was very humbling … that I was chosen by the caucus to be on the ballot in November, and I’m very excited to move forward,” Haak said. “It’s something that Zionsville has … needed for quite a while now, and I’m just ready to go.”

The new mayoral position is a product of Zionsville reorganizing with (i.e. adopting) Perry Township. And despite pending feedback from the Indiana Supreme Court on whether the reorganization plan is lawful, Zionsville is still moving forward.

Whitestown filed the original lawsuit against Zionsville, calling the reorganization plan unlawful. A Boone County judge agreed, but the Court of Appeals reversed the decision June 2.

This allowed Zionsville to move forward with its plan, calling for an immediate mayor. The town council selected Jeff Papa as an interim, specifying he would not run again in the fall.

Papa will finish out the year. Haak will continue as councilman until then, a position he’s held for eight years.

“The Appellate Court ruled in our favor, and until we hear otherwise, we’re rolling forward with that plan,” Haak said.

The only other way Zionsville could have elected a mayor was if it became a city. Haak, however, stressed the importance of staying a town.

“We don’t feel like a city,” he said. “Even though we’ve grown and we’re larger, the atmosphere in Zionsville … feels like a town and acts like a town.”

Additionally, becoming a city would cause some unnecessary financial burdens, he said. Therefore, the town council decided on reorganization.

With the restructured government, the board of trustees that governs Perry Township will cease to exist. Its members, however, will be able to run for town council and various boards and commissions in Zionsville.

If Haak becomes mayor, he said his priority would be “to continue the work that we’ve done the last eight years on the council to get companies to move to [Zionsville].”

Haak also said he’d like to see better relations between Zionsville and Whitestown.

“We’d obviously like to be partners with them, but we’ll have to close the door on this thing first,” Haak said. “[We need] to resolve our lawsuits and put our differences aside after that.”