You are at:Home»Current in Fishers»Fishers on Tap hosts 19 brewers 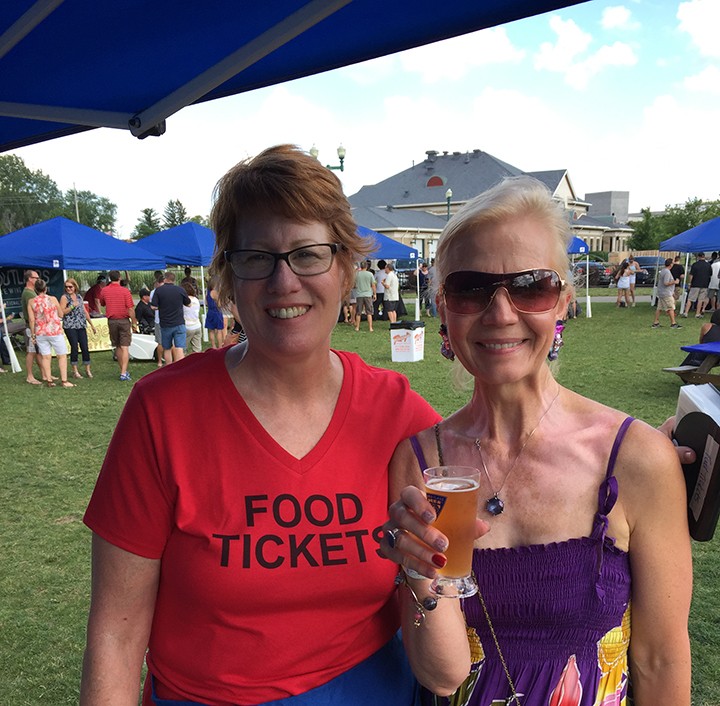 Susan Guindon, a volunteer at the event, with Sandy Wilcox, right. (Photo by Alec Johnson)

Craft beer flowed and the smell of food filled the air again during the sixth annual Fishers on Tap-Summer event this past Saturday.

The event, which was hosted by the Fishers Rotary Club at the City of Fishers Amphitheater, saw 350 tickets sold this year. Nineteen craft brewers such as Sun King and Scarlet Lane shared their latest brews, and Peterson’s, Ruth’s Chris, Eddie Merlot’s, Sullivan’s and Red Sake provided food. Harmony Winery provided wine for those who didn’t want beer.

According to Bill Jerrow, a Rotary Club member and one of the event’s founders, attendance was a bit down this year due to the uncertainty about the weather and competing events in town.

“Still very profitable for us, we just won’t have as much to give back to the community,” Jerrow said.

Despite the dip in attendance this year, Jerrow has found that a large amount of the people who attended this year’s event had attended it last year.

“We find there’s a fairly strong repeat in ticket purchases,” Jerrow said. “If someone purchases a ticket online, we ask how they heard about it. About 35 to 40 percent said they had attended last year, and that’s really high for an event like this. Usually it’s 10 to 15 percent, so we’re pretty proud of that.”

All proceeds from the event will go to local charities in the Fishers area.