You are at:Home»Current in Zionsville»Column: Vasa: Stockholm’s famous ship on display 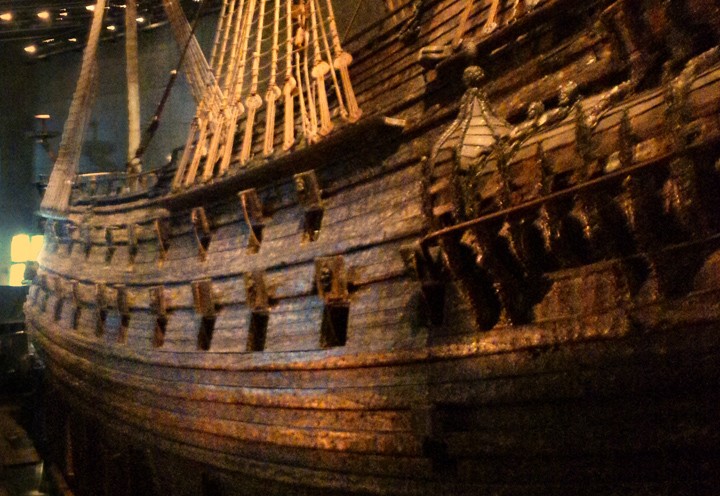 The most popular museum in Scandinavia features an ill-fated Swedish warship launched almost 400 years ago. The museum also holds lessons about hubris and obsequiousness.

By the early seventeenth century, Sweden was the third largest country in Europe, after Russia and Spain. In 1625, its king, Gustavus II Adolphus, ordered a fearsome new type of ship to intimidate rivals around the Baltic. The king, considered the father of modern warfare, specified two gun decks, each with 24 large cannons, and an exterior adorned with hundreds of brightly painted carvings. For three years, shipbuilders, sailmakers and artists worked on the 1210-ton “Vasa,” named for the royal family. In January 1628, the king inspected the nearly complete ship in the Stockholm dockyard and pronounced the untested configuration seaworthy. He then went to Poland with his troops, repeatedly sending back letters demanding to know when his ship would be finished.

With Vasa still in port, 30 sailors ran around its top deck to test the ship’s stability. Senior naval officers could not tell the impatient king his sanctioned design had failed the test. Instead, on August 10, 1628, they launched Vasa on its maiden voyage, with families joining sailors onboard. Gun doors were opened so cannons could salute the admiring shore crowds. Less than a mile from port, a strong gust caught the sails, the ship listed and seawater flowed into the open gun ports. The mighty Vasa sank, taking 50 people to the bottom of the harbor. An official inquiry refused to assign blame for the debacle. By 1683, divers had salvaged Vasa’s brass cannons and the ship was forgotten.

A Swedish researcher rediscovered Vasa in the Stockholm harbor in 1956. Because the Baltic’s low salinity will not sustain wood-eating worms, the oak planking was largely intact. The hull was raised in 1961 and floated ashore, where workers restored the ship using 95 percent original materials. The Vasa Museum, opened in June 1990, displays both the ship and hundreds of shipboard items. Calculations have confirmed the obvious – the upper gun deck with its 24 large cannons rendered Vasa top-heavy.