You are at:Home»Current in Zionsville»Visitors research roots during Global Family Reunion 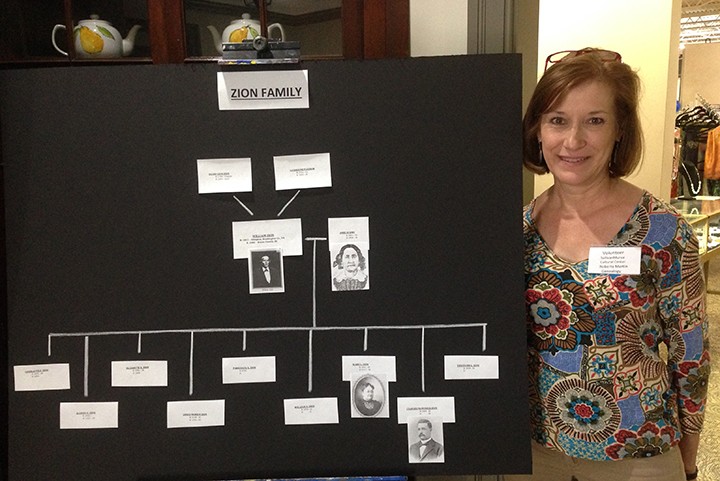 Zionsville’s SullivanMunce Cultural Center served as one of two satellite locations in Indiana (the other was in Fort Wayne) for the Global Family Reunion on June 6. The center live streamed talks on genealogy topics and entertainment from stages in New York City, where the official event was held.

Genealogists helped visitors research their family histories during the Global Family Reunion, which had the theme “family ties.”

“I was born and raised here in Boone County and my parents were married here,” said John Beck, a genealogist who assisted during the reunion. “In tracing their family history through six generations, I found my grandfather removed six times on both sides of the family owned adjoining land in Winston-Salem, N.C., which I thought I was very ironic. The Becks came to Indiana in the 1830s and the Hines didn’t come until 1860s.”

“He was able to take a little information I had and start searching for my husband’s great-grandfather,” Jackson said. “The last name Jackson is common so we hadn’t been able to find anything about him. Mr. Beck found where he was buried and census information so we can start tracking him down. That took 10 to 15 minutes with him doing it.”

Zionsville resident Susan and Bill Nuss attended to do family research before heading to Germany in September.

“We thought we should do a little investigating,” said Susan Nuss, whose maiden name is Selke. “We might even want to spend time when we’re there digging a little farther.”

SullivanMunce, a resource for art, history and genealogy, recently added Ancestry.com, volunteer Roberta Martin said, adding that the center was named a FamilySearch affiliate in the past year.

“That means we’re tied in with the Salt Lake Family History Library for ordering genealogy films and they can be viewed here,” she said.