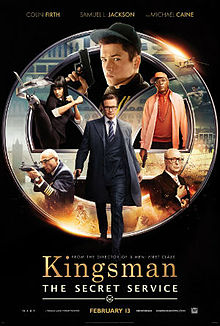 A bit of charm and a lot of smash-mouth, “Kingsman: The Secret Service” was one of 2015’s earliest, and best, surprises.

This super-spy thriller/comedy operates as both a send-up and celebration of the 007 genre. Colin Firth plays Harry Hart, aka Galahad, a member of the sophisticated and ultra-secret spy agency knows as the Kingsmen. They prefer to do their bidding beneath the veil of anonymity, using all sorts of cool gadget hidden inside their signature dapper suits and eyeglasses.

Harry recruits rough-and-tumble street scamp Eggsy Unwin (Taron Egerton) to be his protégé, and the story is framed around the familiar training and initial missions of the new guy. It seems some nefarious force is taking out the Kingsmen one by one, so graduation will have to come early.

The bad guy is a Steve Jobs techie type, deliciously played by Samuel L. Jackson – a combination of computer nerd, gangster and maniacal villain. His henchwoman has two prosthetic legs outfitted with swords to dice up her victims.

Directed by Matthew Vaughn, “Kingsman” is a smart and energetic flick that evinces a tone somewhere between a smirk and a gasp. This is a movie that makes fun of spy movies, but loves them, too.