You are at:Home»Current in Westfield»Westfield Police Department stage investigation complete 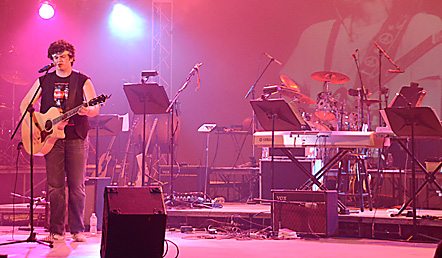 WHS student Blake Rice performs in American Pie on the stage that collapsed on April 23. (Photo by Anna Skinner)

From the night of the Westfield High School partial stage collapse at the “American Pie” performance up until May 8, the Westfield Police Department maintained security of the scene. Assisted by the Indiana State Police, they completed an investigation to determine the cause of the collapse.

In result, the investigation found that a Westfield Washington Schools employee, Quinten James, had purchased construction materials and WHS students assisted him in construction of a “pit lid” that was built over the orchestra pit.

The “pit lid” was constructed on James’ own design, which failed and resulted in the collapse of the stage and multiple injuries among students performing in the final act of “American Pie” on April 23. The structure had been attached to a trim piece instead of a primary support piece, and was constructed more so like a deck than a stage.

The WPD has turned the case over to the school and there have been no criminal charges filed. Captain Charles Hollowell said they did not discover any criminal culpability, and it is now a civil issue.

“We turned it over to the school, it is now more of a civil issue with civil remedies and personal issues,” he said. “We found the determination of the cause, and there is nothing else we have to issue since our steps are done.”

The WPD also received a letter from the prosecutor’s office that stated the State could prove beyond reasonable doubt that there was no criminal intention or knowledge.

“Accordingly, while the result of the failure of the stage’s construction was catastrophic, the construction and maintenance of the stage did not rise to the level of criminal culpability,” Andre Miksha, chief deputy prosecuting attorney, stated in a responding letter to the WPD.

The school has taken over the investigation, with no disciplinary action yet decided.