You are at:Home»Current in Zionsville»Column: Dendera temple and ties to Cleopatra 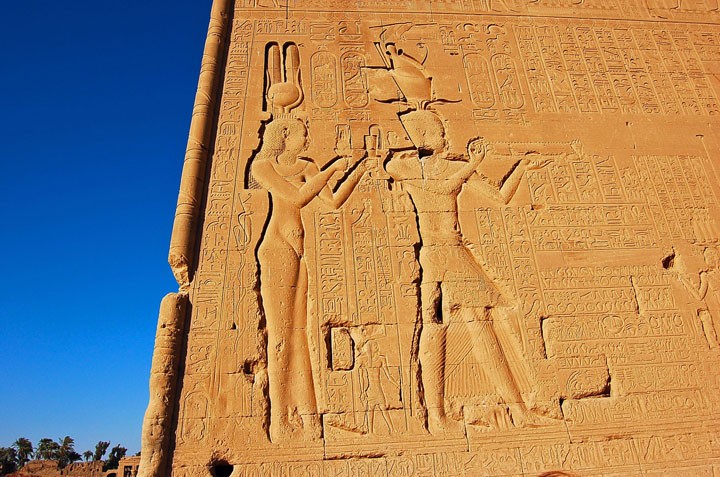 Cleopatra and Caesarion on Temple of Hathor (Photo by Don Knebel)

Visitors to the Dendera temple of Hathor experience one of the best preserved of all Egyptian temples. They also see a rare image of one of the most fascinating women in history.

When Alexander the Great died in 323 B.C., his general, Ptolemy, founded a pharaonic dynasty that ruled Egypt for almost 300 years. Like Alexander, the Macedonian Greek pharaohs of the Ptolemaic Dynasty believed they were gods and built temples celebrating themselves and their achievements. In about 55 B.C., Ptolemy XII began erecting a temple to Hathor, the Egyptian goddess of fertility and beauty, on the site of earlier temples near the town of Dendera, 37 miles north of Luxor. Heroic reliefs carved on temple walls were apparently intended to represent Ptolemy XII, but he died before the images were identified.

Ptolemy XII was succeeded in 51 B.C. by his daughter, Cleopatra VII, who charmed her subjects by learning the Egyptian language. Cleopatra displayed other charms when Julius Caesar visited Egypt in 48 B.C. She had herself delivered to him in a rug, leading nine months later to a son nicknamed Caesarion (“Little Caesar”). Cleopatra was forced initially to share power with her brother, Ptolemy XIII, who was eventually killed trying to escape forces loyal to Cleopatra and Caesar. Cleopatra added her deified image to the rear wall of the Dendera temple, depicting herself as Hathor accompanying Caesarion, her chosen successor, pictured as pharaoh.

After Julius Caesar was assassinated in 44 B.C., Cleopatra seduced Mark Anthony and bore three of his children. According to first century Jewish historian Josephus, Cleopatra also attempted to seduce Biblical King Herod, who rejected her advances when he visited Egypt in 40 B.C. After Cleopatra’s suicide in 30 B.C., Romans under Octavian killed Caesarion, ending the Ptolemaic Dynasty. Roman emperors, including Trajan, then enhanced the Dendera temple. Emperor Nero, who saw himself as a god, added his likeness to the temple walls.

The Dendera temple of Hathor, surprisingly intact after more than 2,000 years, is a superb example of Greco-Egyptian temple architecture. Seldom-seen images of Cleopatra and Caesarion are a bonus.