You are at:Home»Current in Zionsville»Local doctor receives Golden Hoosier Award for volunteer work 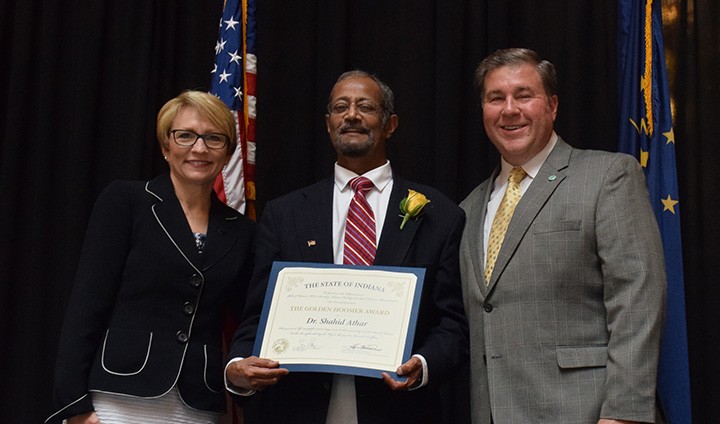 Dr. Shahid Athar is modest about his volunteer contributions.

Athar, who received the Golden Hoosier Award from Lt. Gov. Sue Ellspermann on May 18, said there are many who do more than he does.

“I accept the award on their behalf,” Athar said. “It’s not a good idea for me to brag about my own input. The award is for the work that we all do.”

The award, which began in 2008, annually honors a group of outstanding Hoosier senior citizens for their lifetime of service and commitment to their communities. Athar, 70, who lives in the Zionsville area, was nominated by Carmel Christian Church pastor Jerry Zehr and IUPUI professor Razi Nalim.

Athar, who was born in India and is a U.S. citizen, is a clinical associate professor at Indiana University School of Medicine and an endocrinologist in private practice in Carmel with the St.Vincent Medical Group.

Athar serves as a volunteer physician for Indianapolis’s homeless, HIV patients and others who may not be able to afford medical treatment. In addition, he serves as a board member for the Protection of Conscience Projects, St.Vincent Ethical Committee and the Islamic Medical Association of North America. Athar is known for his advocacy of strengthening interfaith relationships as a way to overcome terrorism and to help Hoosier Muslims deal with the negative fallout from the attacks of Sept. 11, 2001.

“If I had to pinpoint one thing it would be speaking against terrorism and speaking for peace and spirituality as a way of life,” Athar said of his most important volunteer efforts. “And to bring all religions together in love of each other and taking care of the needy and the poor. With all the suffering in the world, we need to share our concern and do things.”

Athar is the founder and past president of Interfaith Alliance of Indiana and Islamic Society of Greater Indianapolis. In 2002, the Indianapolis Medical Society awarded him the Gov. Otis Bowen Award for Community Service for his interfaith activities.

Athar and his wife Shaista have four children and 10 grandchildren.