You are at:Home»Current in Zionsville»Upgrades likely coming to I-65 interchange at Whitestown Parkway 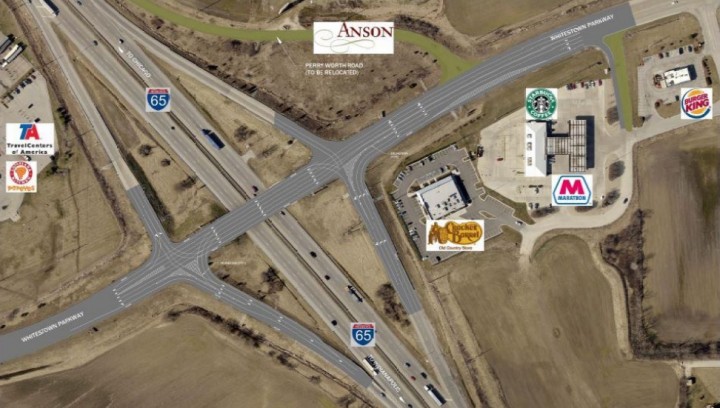 INDOT has approved plans to upgrade the I-65 interchange at Whitestown Parkway. (Submitted image)

INDOT has given Whitestown the green light on plans to add lanes to the interchange at Whitestown Parkway and I-65, which is expected to reduce congestion in the area.

“The safety of the residents is the number one reason why it needs to be done,” said Dax Norton, Whitestown town manager. “It is a congestion issue, especially during the evening commute.”

Debbie Calder, INDOT Communications Manager for the Crawfordsville District, agreed that congestion was the key issue for the agency signing off on the work.

The Whitestown and Zionsville town councils passed resolutions in the summer of 2014 urging INDOT to upgrade the interchange but were told by the state agency that the project was not included in the 10-year funding plan. Whitestown decided to search for another option and used town resources to design a plan that could be implemented in the short term. INDOT signed off on the plan in March.

Whitestown also proposed a plan to fund the entire $1.6 million project through a tax increment financing bond. If approved by the town’s redevelopment commission, redevelopment authority and town council, the bond is expected to close in mid-July with construction beginning as soon as September and wrapping up as early as November.

Commuters can expect to see repaving and restriping of the bridge, according to Norton “to add more turn lanes in all directions: east, west, north and south.” He said some kind of fix to the area has been discussed since 2011.

“It was in the Major Moves I-65 widening project, but it was taken out due to lack of funding. The topic was recently taken up again last spring by the Whitestown Town Council,” Norton said. “Since Whitestown is the fastest growing community in the state of Indiana, which is putting continued pressure on the interchange, we felt it was necessary to be proactive and move the project forward immediately.”

The end benefit to commuters, Norton said, will be “a safer interchange for all who drive in the area. Also reduced wait times and reduced backups.”

Town official will also continue to work with its partners at INDOT, he said, for a complete reconstruction of the interchange within the next five years.