You are at:Home»Current in Zionsville»Project-based learning, $10,000 in grants leads to safer path at PVE 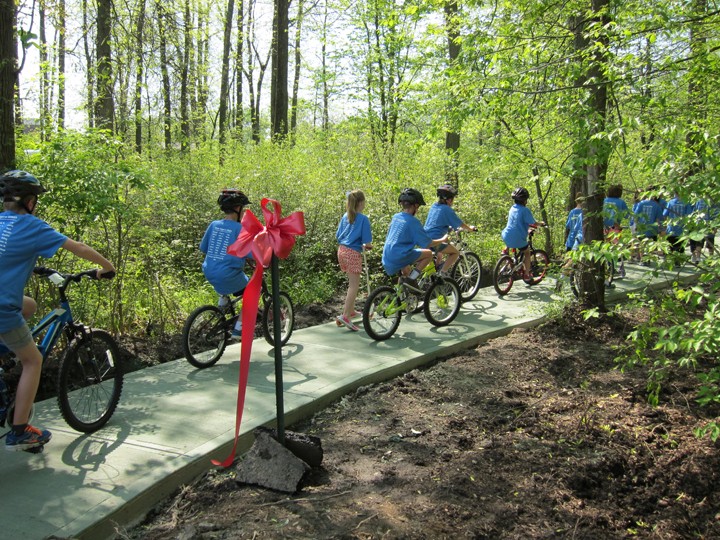 The newly paved path behind Pleasant View Elementary officially opened for use May 6 and is now safer than ever for bikes, thanks to the students in Kasey Cope’s second grade class. Her students became the first to use the new path, carefully fastening on helmets before taking a few laps at the ribbon cutting ceremony.

The project, known as Bike Your Way to Safety, started after Cope attended a conference about project-based learning, a teaching method that encourages students to learn about real-world problems and think critically to solve them.

PVE students decided to use project-based learning to find a way to make the mulch bike path behind the building safer. They compiled a list of adjectives to describe both a “safe path” and an “unsafe path.” A class-wide vote decided that the material of choice for the new path should be concrete.

With a clear goal in mind, Cope’s students grabbed their rulers and calculators and got to work, first measuring the path and then doing the math to figure out how much the project would cost. The class came up with a total of $8,000, bringing them to the next step: applying for grants.

“Writing grants (was my favorite part),” said John Bailey, a student in Cope’s class. “I think we wrote five.”

Students worked hard to prepare presentations for each grant, and their hard work paid off as they earned enough grant money to cover the cost of the project.

The school now has a path that’s safer for bikes, but that’s not the project’s only success.

“(We’re) trying to get other teachers in the district to take the risk to try PBL,” Cope said.