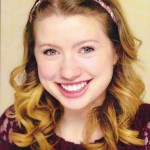 Kennedy Martin was seven years old when it happened. She was bitten, and there was no cure. The only remedy is to keep getting back on the stage.

But the acting bug has a way of finding just the right victim.

“I have been performing since the age of seven when Brent Marty cast me in ‘Once Upon A Shoe’ at Junior Civic,” Kennedy said. “After that I was cast in Actor’s Theatre of Indiana’s ‘Beyond the Rainbow’ and had a chance to work alongside professional actors for the first time. Those two experiences really got me excited about theatre, and I have been performing ever since.”

She came to Beef & Boards Dinner Theatre in 2013 to play Louisa in that season’s Family Show: “The Sound of Music.” She’s performed in each of the theatre’s annual family shows since. In 2014, she played Jane Banks in “Mary Poppins.”

“I loved playing Jane Banks in ‘Mary Poppins’,” Kennedy said. “It was an uplifting story and there were a lot of high energy dance numbers.”

But this year she is flying high in her new role. As Wendy in “Peter Pan,” Kennedy hovers above the Beef & Boards stage that she’s come to know so well. In addition to the family shows, she’s appeared in “A Christmas Carol” and most recently as Fern in the Live Theatre for Kids production of “Charlotte’s Web” earlier this season.

Kennedy is a junior at Heritage Christian High School, where she has also soared.

“I was recently inducted into National Honor Society. This is a big accomplishment – especially since I spend so much time outside of school taking voice, dance, and acting classes, auditioning for shows, rehearsing and performing,” she said. “Sometimes it feels like it’s hard to fit school in!”

But she just can’t give up the spotlight, and plans to pursue a career in the performing arts.

“I am only a junior in high school and I have already had so many great opportunities to do what I love,” Kennedy said. “I feel so lucky to have the opportunity to work at Beef & Boards!”

“Peter Pan,” the high-flying Tony Award-winning musical featuring the iconic songs “I’m Flying,” “I’ve Gotta Crow,” “Never Never Land” and “I Won’t Grow Up,” is on stage for 58 performances through July 3 in the intimate space of Beef & Boards Dinner Theatre. Tickets range from $40 to $65 and include Chef Odell Ward’s family-friendly dinner buffet, prepared in-house for each performance, and select beverages. Parking is always free. Because “Peter Pan” is Beef & Boards’ 2015 Family Show, there is a $10 discount off the regular ticket price for children ages 3-15 for all performances.