You are at:Home»Current in Zionsville»Italian sculptor creating Marian shrine for Zionsville church 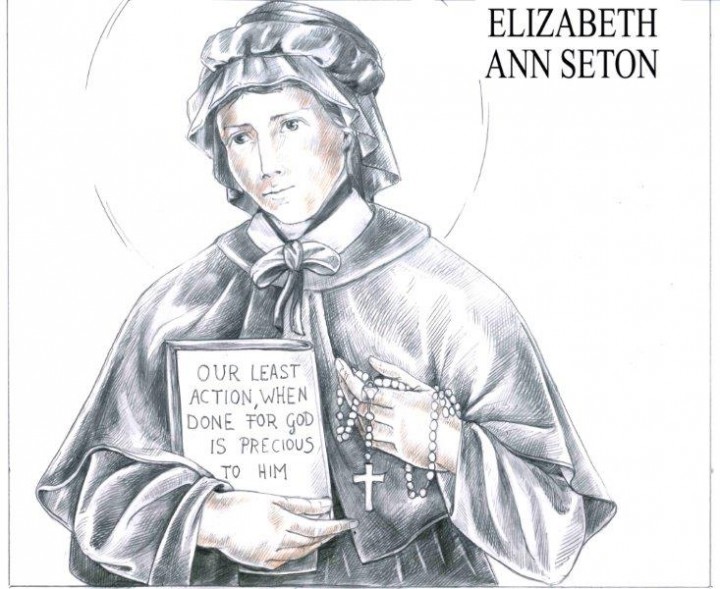 Elizabeth Ann Seton is one of the holy women that will surround the Marian shrine. Church officials do not want to reveal the design of the shrine itself before unveiling it to parishioners. (Submitted image)

Art and religion have always gone hand in hand. Artists use religious icons and symbols as a way to uplift the spirit and pay tribute to religious figures.

“It’s not only a religious shrine to help the parish grow spiritually but also if you’re an artist you’re going to want to see Carl Moroder’s work,” McKee said.

SALCC’s shrine will feature a large, hand-carved representation of the image of Our Lady of Perpetual Help. Church officials are not yet releasing renderings of the sculpture or indicating where it will be located.

The hand-carved statue will stand at about five feet tall and behind her will be reliefs of 20 different holy women and two archangels, Michael and Gabriel. The artwork will be created in Italy and then shipped to the U.S.

“In a lot of older churches they already have a devotional area for our lady. Ours is a rather modern church so we didn’t have it built in like a lot of other churches,” said Nancy McKee, Marian Shrine committee chair and parishioner. “It has been a vision of Father [Dennis] O’Keeffe’s to get a Marian Shrine since 2004.”

The church will host a dedication of the artwork after the 5:30 p.m. mass on Aug. 1, the anniversary of St. Alphonsus Liguori’s death.

“To have the shrine dedicated on St. Alphonsus’ peace day is going to be very big,” McKee said.

St. Alphonsus Liguori Catholic Church will hold a session for those interested in learning more about the Marian Shrine. The session will be held from 7 to 8 p.m. May 28 in the Parish Hall. Art historian Carole Kaufmann will present intriguing and inspiring facts about the Blessed Mother Mary. See work by Marian Shrine artist Carl Moroder at www.moroder.com/english/carl.htm.